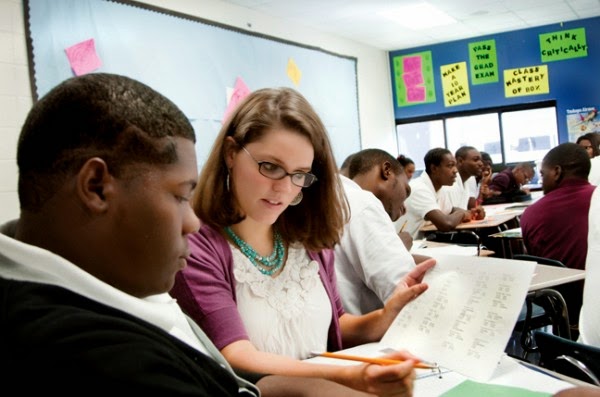 Democracy and Class Struggle has been sent this article from the Atlanta Black Star and would like any viewer comments on implications of this article for the struggle for equal education for all.
This information highlights contradictions between gender and race and class inequality.

There are about 3.2 million public school teachers in America, and more than 80 percent of them are white females. With an overwhelmingly white female teaching force across the country, many Black boys encounter instructors who are not entirely comfortable with their presence. This has a severe impact on their academic fortunes.

Female Teachers Give Boys Lower Grades
Studies have found that when female teachers evaluate students without reference to objective test scores, the teachers grade boys well below their actual academic performance. Professor Christopher Cornwell at the University of Georgia found that when boys perform better than girls on tests, after the subjective evaluations by female teachers were factored in, the girls wound up with higher grades. This disparity was even more striking for Black and Hispanic boys.


Boys Are Graded More Fairly in AP Classes—Where There Are Less Black Boys
According to writer Christina Hoff Sommers, author of the book "The War Against Boys: How Misguided Feminism Is Harming Our Young Men," when the grades at prestigious Scarsdale High School in the suburbs of New York City were closely evaluated, it was discovered that there was little or no difference in the grades of boys and girls in advanced-placement classes, but in standard classes the girls were graded a lot higher. Since Black boys are less likely to be placed in advanced-placement classes, this can severely impact their grades.

As educator and writer Jawanza Kunjufu stated in his book, "Black Students, Middle Class Teachers," a child has a much greater chance of being placed in special education or tracked in remedial classes if he or she doesn’t look or speak like the teacher. Across the country, Black boys are much more likely than other students to be placed in special education classes and labeled mentally retarded, according to the National Education Association. In fact, the NEA says Black and Hispanic males constitute almost 80 percent of youth in special education programs nationwide.


They Are Less Likely to Have Black Boys Tested for Gifted Programs
According to NEA statistics, Black boys are 2.5 times less likely to be enrolled in gifted and talented programs, even if their prior achievement reflects the ability to succeed. This affects their likeliness to wind up in AP courses in high school, meaning they are less likely to be challenged at the highest levels.


Black Boys Are More Likely to Receive Lower Quality Instruction
A study by Cornell researcher C. Kirabo Jackson found that as a learning institution gets more Black students, the best teachers move away, presumably to schools where White children are predominant. This means the system almost guarantees most Black students will always receive poorer quality instruction.


About Nick Chiles
Nick Chiles, Editor-in-Chief of AtlantaBlackStar, is a Pulitzer Prize-winning journalist and New York Times bestselling author. He has written or co-written 13 books and won over a dozen major journalism awards during a journalism career that brought him to the Dallas Morning News, the Star-Ledger of New Jersey and New York Newsday, in addition to serving as Editor-in-Chief of Odyssey Couleur travel magazine.