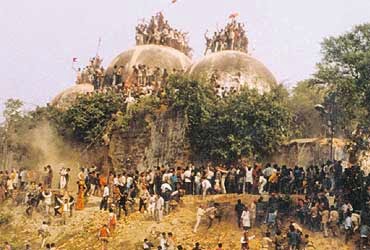 
Exactly 18 years ago, on 6th December 1992, Hindu religious fundamentalist goondas in connivance with the then Congress government at the centre, demolished Babri Masjid at Ayodhya. Firstly, these Hindu fundamentalists made 500 year-old Babri Masjid a controversial site by claiming it as the birth place of Lord Rama, and on that pretext many a time instigated communal disturbances in the country killing thousands of Muslims.


Demolition of Babri Masjid was the biggest attack by Hindu fascists in the history of our country. The likes of LK Advani, Ashok Singhal, Murali Manohar Joshi, Praveen Togadiya, Uma Bharati, Sadhvi Ritambara, who were directly involved in it were not punished by any court even till today. On 30th September, giving its verdict on the ownership rights of the controversial site, pending for 61 years, the Lucknow bench of the Allahabad High Court with its Brahminical Hindu religious ideology did injustice to Muslims.


Without any historical evidence and archeological proof it stated the controversial place to be the birth place of Lord Rama. First occupying Masjid, then demolishing, now by giving verdict to build temple, that too to handover the very forces involved in demolition, clarifies Indian state’s Hindu fascist mindset.


By this verdict, once again it has been proved that the Houses of justice in this country favour only exploitative classes and Brahminical Hindu religious fanatics, but not peasants, workers, dalits [the lowest group in India’s oppressive caste system-ed], women and religious minorities. By court verdicts a solution to this cannot be found, only by smashing the present system and by establishing New Democratic State, a solution to this can be found.

In the recent past, many evidences surfaced proving the involvement of saffron [Hindu fundamentalist-ed] terrorist groups of the Sagh Parivar in bomb blasts at Malegaon, Ajmer Sherief, Hyderabad’s Mecca Masjid, Samjhouta express. The leaders of VHP, RSS, Bajarang Dal and other organizations on the proxy name of ‘Abhinav Bharat’ conspired bomb blasts and killed many innocent people.

It has become a norm for the police and intelligence agencies to blame Muslims as culprits, wherever and whenever bomb blasts take place, even if at Masjids. Arresting hundreds of youth without any reason and severely torturing, killing in fake encounters, implicate false cases, accusing of having links with ISI [Pakistani army’s intelligence branch-ed] and thus playing with lives is part of the Hindu communal and fascist policies of the governments.

By projecting every Muslim as a terrorist through media, governments are trying to suppress them by all means. Those who demand to hang Ajmal Kasab who is involved in Mumbai attacks, at the same time keeping mum or not raising their voice loudly against Hindu fascist killers of Sangh gang is a dangerous sign.

Governments are not arresting these saffron terrorists, even if they arrest a few on some occasions, are setting them free declaring innocent by not conducting thorough probe. On the other hand, those intellectuals, journalists, media organizations, newspapers and activists who dare to raise their voice against these Hindu fundamentalist forces are being attacked by Sangh gang at several places. On the whole, the communal fascistic trends of the Indian state are taking a severe form day by day.

Secular forces of all religions, democrats and progressive thinkers should come forward and fight unitedly against Hindu communal fascism. All of us must condemn the attacks of Hindu fascist forces on Muslims, Christians and all other religious minorities. At the same time all other kinds of religious fundamentalism should be opposed.


The place of Babri Masjid belonged to Muslims; it should be given to Muslims and has been demanding that Babri Masjid should be rebuilt at the same site and those fascist leaders who had demolished it must be punished severely. Observe ‘BLACK DAY’ on December 6, by conducting meetings and processions and wearing black badges in protest of Hindu communal ism.
Abhay spokesman,

this is ridiculous. the CPI maoist should read and study very carefully Avakian's 'Away with all Gods' and get straight over the question of religion.