India: Punjab - Ludhiana - Homage Ceremony in memory of Shenaz to be held on 28th December 2014 by Harsh Thakor 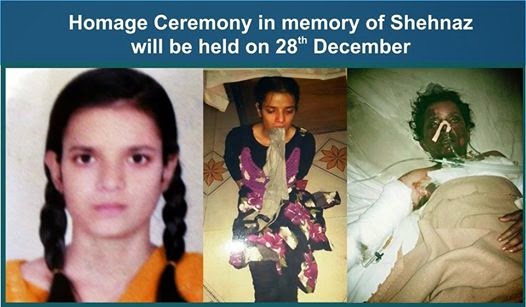 Every citizen of this world commited in standing against the iron feet of oppression and the liberation of mankind from the shackles of terror must condemn the murder rape of Shahnaz and support the big protest demanding punishment of the culprits in Ludhiana ,in Punjab on December 28th.

Shahnaz stands as candle in the struggle for women's liberation and the injustice perpetrated on them.

In a semi-feudal or even capitalist Society women are victims of exploitation.


Concerted struggles of women have to be built up to protect them from becoming victims of feudal or capitalist slavery.Today all over India in villages arguably every day or two some women is raped but the facts not reported or the police siding with the culprits.Even in more developed regionsof India like Punjab,it is a common phenomenan.

Com Shanhnaz belonged to factory worker's family in the industrial city of Ludhiana.On December 4th she was attacked by goons in her own house.5 days later she succumbed .What we must remember is the glorious,death defying  struggle she waged to win justice ,swimming totally against the tide.This is the city which is staging the most organized movement of the Industrial workers .

After the rape on December 4th a series of most commendable work  organizing a series of  concerted protests  have been led by the Bigul Mazdoor Dasta,Hosiery workers Union  Textile Workers Union,the Naujwan Bharat Sabha,and the Punjab Students Union (lalkar) group.

Meticulous efforts have been made in explaining how rape is connected to the exploitation or opressive nature of of the capitalist system and not an isolated phenomena. 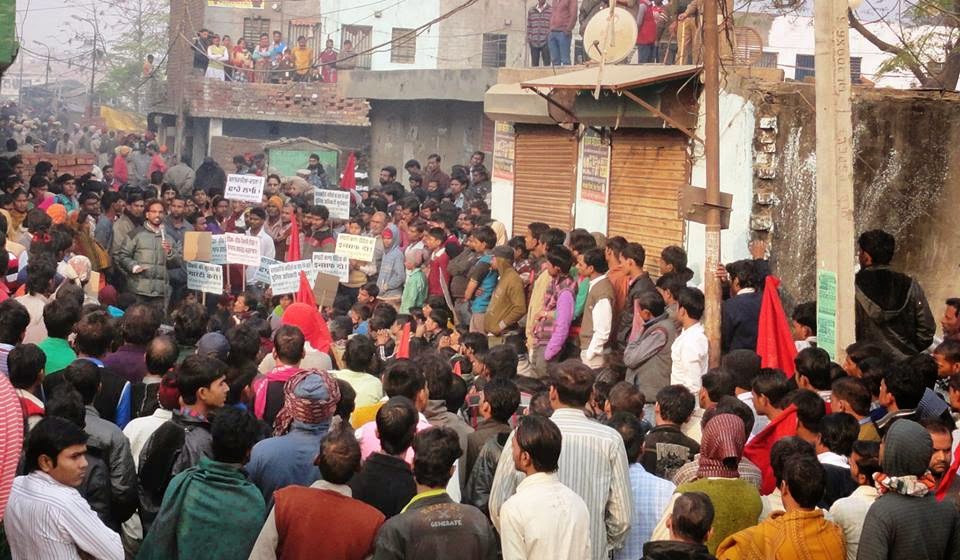 The response in the struggles has been heartening and we should all pray that the December 28th protest is grand succes which illuminates the city like a red flame engulfing it.I get vivid memories of rape that took place in Dahanu in Maharashtra 25 years ago and one in Elphinstone college of Mumbai.

It proved that all sections of women were victims of rape from the adivasi tribals to upper-middle class college students.What is heartening today that most women are becoming part against anti-capitalist or anti-feudal struggles and many cadres of the Punjab Students Union are women comrades .

Globalization and consumerism have made women greater victims of sextual opression.combined with the Hindu revivalism.I congragulate the efforts of the Textile Workers Union Hosiery workers Union ,Naujwan Bharat Sabha and Punjab Students Union (lalkar) for standing up with such might.A revolutionary women's organization is the need of the very hour. 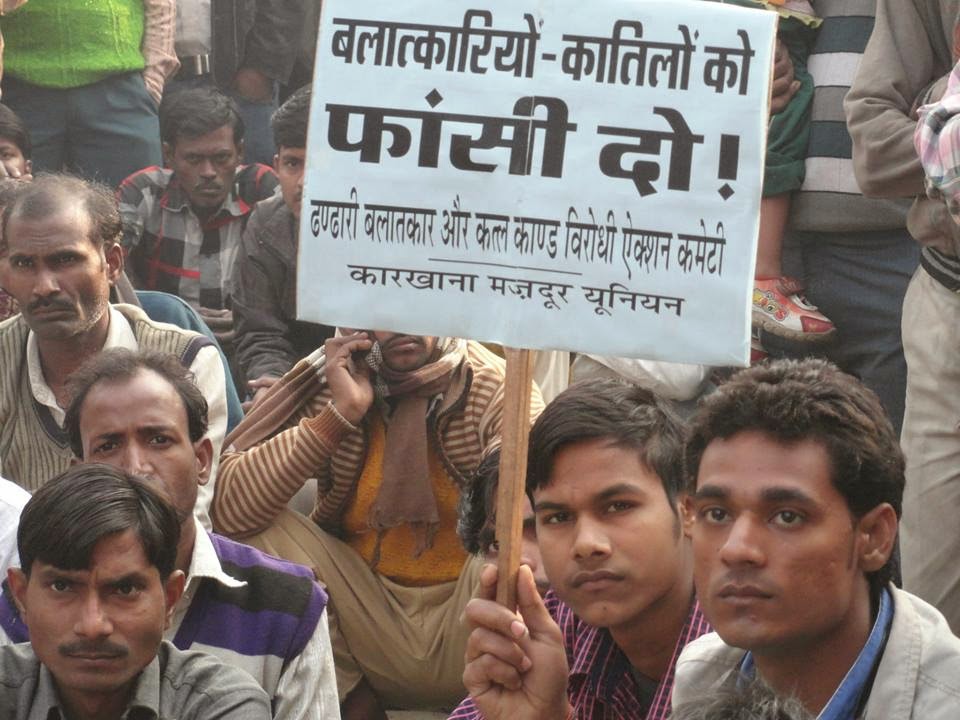 Below is a statement by Textile workers Union Secretary,Lakhwinder


The ceremony to pay homage to Shehnaz, the victim of Dhandari rape and murder case. The decision regarding this was taken today in a meeting held today in a Dhandari by Shehnaz’s family and Committee against Dhandari rape and murder incident formerd by Karkhana Mazdoor Union Punjab (KMU), Textile-Hosiery Kamgar Union Punjab (THKU), Naujawan Bharat Sabha (NBS) and Punjab Students Union Punjab (PSU, Lalkar) and many other people. We appeal all the justice loving people to attend the homage ceremony.

Shehnaz has risen as symbol of struggle of all women and oppressed people against the repression. Violence against women is continuously increasing day by day in our society. Anti-women male mentality is targeting women at every step of their life. Crimes against women like eve-teasing, molesting, kidnapping, rape, acid-throwing incidences, murder etc. have increased to a dreadful extent. Shehnaz continued to fight despite all sorts of adversaries and in her struggle for justice and dignity, she has pay the cost with her life but by waging a uncompromising determined struggle against the oppression, she has created an example, a symbol of struggle against oppression by all the women.

Her fight shouldn’t be allowed to be sneaked out of the memory of people.

A big homage ceremony will be held in her memory on 28th December in main Sabzi Mandi of Dhandari Khurd.

Shehnaz waged fight till her death against the injustice done to her. The goons who are having the support of political leaders and police-administration, continuously pressurized and intimidated her to take back the cases of rape and kidnapping lodged by her against them and even beaten her badly in her own house. Shehnaz and her family were continuously receiving threats for life but she stood firm, did not stepped back and fought for justice.

Even after getting no help from police, administration, government and political parties, she did not give up his fight. Normally victims of crimes like rape, molestation, kidnapping etc. and their families conceal such incidents in fear of social stigma, threats of goons, attacks on life etc. But Shehnaz was that brave girl who decided not only not to hide the crime done against her, but also decided to fight to bring the goons before the law and punish them.

In her fight for justice, she had to face the attack on her in which she lost her life. On 4th December, the goons entered her house forcibly and after throwing kerosene on her, they set her ablaze. After suffering 90% burns, she keep fighting for life for four days but on 9th of December, she lost and left us. While in her last words, she said – man mujhe insaf chahiye. Shehnaz’s last wish will be fulfilled at every cost. To get the justice, a fierce struggle will be fought. To get the the culprits hanged, action and punishment for the erring police officers, the workers, youth and student organizations will wage a militant struggle.


The deputy CM and home minister of Punjab, Mr. Sukhbir Badal is trying to malign the victim her family and shield the culprits of this heinous crime by giving baseless and insensitive statements about this case which has shook every sensitive person of the state.

These abominable tricks of the Punjab Govt. will not be allowed to succeed. A valiant struggle to get culprits punished severely and along with this, a fight to uproot the crimes and oppression against women in society will be the only true tribute to Shehnaz.