Sri Lanka: Nirj Deva, MEP and crimes against the environment in Sri Lanka 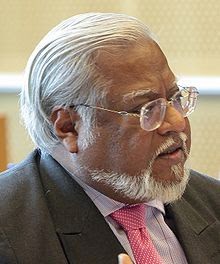 Crime against environment committed by a conservative MEP

In the war affected Northern Province in Sri Lanka, massive amount of waste oil which is generated from the electricity power station situated in Chunagam is poisoning drinking water in the surrounding area.

Due to this environmental disaster, several families are displacing in search of clean water and land.

Already Sri Lankan government’s  planned militarisation threw a large amount of population out of their home.

The government of Sri Lanka doesn’t not want to take any action or talk about this on going environmental disaster as this could be part of their genocidal agenda.

More over the power plant is directed by a well known British politician.

The company which owns the power plant, MTC Walker plc’s one of the directors is Nirj Deva, MEP of conservative party and the well known power broker in UK.

Conservative party which pretend to promote environmental measures to protect the world allows their  MEP commit the crime against environment just to make profit.

Labour party which opposes conservative is proud being silence on this crime.

British public should be ashamed as one of their representative is committing crime against the environment and humanity.
Posted by nickglais on 12/04/2014 05:05:00 AM