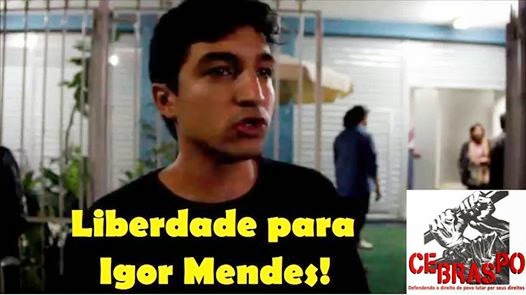 The militant of the Student Revolutionary People's Movement and the Popular Front Independent - RJ Igor Mendes, geography student at UERJ and member of the Collective Enemies KING - who dispute the election to the DCE UERJ, is now imprisoned in the dungeons of the old state.
Igor Mendes is political prisoner in Sao Goncalo, and divides cell with other prisoners. However, if the reaction believed that the arrest of our fellow would be intimidated or worse, intimidate him, could not be more wrong!
At the first opportunity he had, Igor then tried to pass a message to his companions: "Raise your head and do not let down by the pursuit of this Fascist State!" and when it was placed in a police van to be transferred proudly shouted: " They shall not pass, will not pass "
The attitude of our fellow in the prison demonstrates an ideological commitment to the oppressed masses of our country and around the world and serves as a great example of the posture of a true revolutionary, even when in the most adverse situations.
Out the deprivation of liberty, the result of a rotten campaign of persecution to the fighters of the people, the Fascist State attacks of all forms.
Just as it is "standard procedure for ordinary prisoners," the troglodytes of the prison system found that would ease to shave his head, in a first attempt to demoralize the companion.
Igor resisted bravely, and only the warden already feeling the pressure of the campaign organized on the streets for the release of fellow prevented him to be beaten by dogs that are suitable for the most vile and wicked craft within the men destruction cages.
When inside the cell, our companion caught tough fight to have access to books and with the support of his cellmate, got everyone to have access to the library.

Igor has been actively connected to incarcerated masses, including organizing a rotation system among the prisoners to clean the cell. This information was passed by the team of attorneys to monitor the fellow who also reinforced the message passed before.
Even at a time of difficulty, Igor Mendes is aware of the character of the State and his arrest and knows that only a large and combative campaign outside and discpilina associated with the highest spirit to bind the masses and serve the people of all heart can secure his release.
The Habeas Corpus has been filed and will soon be given an opinion, but neither we nor the companion Igor, as well as broad sectors of society retain the illusion that there is no trace of justice or fairness in this rotting order or the gears of this fascist state rotten and genocidal bourgeois landowners and the service of imperialism, mainly Yankee.
We call on all progressives and Democrats, students, teachers, honest intellectuals and workers you to join the campaign demanding the immediate release of Igor Mendes and all political prisoners and the extinction of the process!
Freedom for Igor Mendes, Caio Silva, Fabio and Rafael Raposo Braga!
Political prisoners: Freedom now!
Fighting is not a crime !