KOZHIKODE: Signalling intensification of their activities in Kerala, Maoists have launched three simultaneous attacks in Palakkad and Wayanad districts on Monday morning.

A 15-member armed group barged into the forest range office at Mukkali near Silent Valley in Palakkad and burned the files and damaged computers and furniture at around 1.30am. Maoists also torched a vehicle of the forest department parked in front of the office.

The group pasted posters on the walls around the office urging the people to take up arms against the government. The leaflets thrown at the premises blamed the government for the pathetic condition of the tribals. No one has been injured in the attack as the office was vacant at the time of attack

People in the nearby official residence of the forest officials came out on hearing the noise. But seeing the armed squads of the Maoists, no one dared to come near the office. 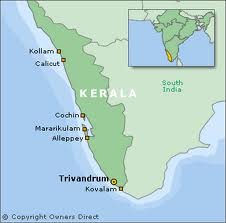 Another group of seven persons ransacked the outlets of the Kentucky Fried Chicken (KFC) and McDonalds at Chandragiri in Palakkad city at around 7am. Members of the group who covered their faces smashed the glass doors of the outlets and distributed leaflets urging the people to fight agents of US imperialism.

The forest aid post at Kunjom under Vellamunda police station also came under attack on Monday morning. The attack came to the notice of the police much later as no one was present at the aid post at that time.

The Maoists left the copies of Kaattuthee (Wild Fire), the official bulletin of the Kabani dalam of the CPI (Maoist).