Tasks of communists in Ukraine, Donbass and the West by Victor Shapinov 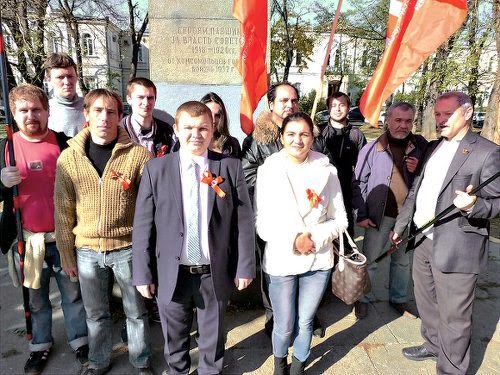 Workers World: What are the main tasks of Ukrainian communists in the coming period?

Victor Shapinov: The main task is to win a place for our political presence again.

Now we have a dictatorship in Ukraine. If you are a communist or leftist, you cannot speak freely — not in the media, not in the street, not anywhere. It is an underground situation.

It will remain this way unless we defeat the regime, though it may change in some degree — for example, if bankruptcy forces the transition to a more democratic regime, or if there is a victory of the people’s army and the territory of the people’s republics spreads.

I think it is something like the tasks of communists in Spain under Franco or in Greece under the Black Shirts.

The Kiev regime is not stable. It is violent and oppressive, but it’s weak. It is symptomatic that it has to be very oppressive because of its weakness.

Comrades who are inside Ukraine have to save their organization and save themselves from arrest or worse.

You see, what we are doing is trying to reanimate political activity in Odessa, in Kharkov, to support the political prisoners. They have to know they are not alone, that we did not forget about them. For us they are prisoners of war and we must free them from this regime.

There was an assault from the Maidan side, not only military but political. They repressed everyone in the southeast. But the pendulum will swing. We are waiting for the wind to shift.

[Maidan is the pro-imperialist movement which took its name from the central square of Kiev, the Ukrainian capital, where pro-West forces held protests in late 2013 and early 2014, and took power after the overthrow of President Victor Yanukovych in February. — WW]

Soon we will see a new wave of people’s protest which will merge the anti-Maidan, anti-fascist and democratic agenda with a social agenda. Since Maidan won, the conditions of common people have gotten worse and worse, due to rising prices, rent hikes, utility tariffs and so on.

And this, of course, is the task of communists: to merge the social and political protests together.

WW: And in the Donetsk and Lugansk People’s Republics?

VS: The military side of things is very good; the militia commanders are doing a good job. The communists of Ukraine are not so experienced in this area. But there are big problems and weaknesses on the civil side, because the leaders did not build a new state, did not make changes in the economy.

There are some territories that are controlled in the military sense, but where the people’s militias don’t have strong links with the civilian population. There is not enough explanation of their goals or political mobilization of the people. It is a big danger. Winter is coming and all the social conditions will worsen.

So there is a lot of work for Borotba and other communists. We are exploring how we can be part of this. Some of our comrades in Donbass are already included, while others are active in the militias.

But even those of us who are now in exile may be needed by the people’s republics. Right now we are discussing how we can be helpful with some officials. We don’t want to go in like tourists.

This situation after the Maidan coup is quite new for the whole left, including us, of course. We don’t have a diagram with points that we should do this, this and this to establish socialist power. We are working in new conditions, and we are improvising.

WW: What can we in the U.S., and the international communist movement as a whole, do to support your struggle?

VS: The media call the situation in Ukraine an “information war.” And I think this is correct. It’s a cliché, but in this case it is true.

The whole world now lives under pro-Western propaganda. People in the U.S. and many other countries see things from this point of view, because of the media. They may not have even heard of Ukraine before this situation. And so they have no chance to make their own analysis, to decide who is good, who is bad, and which side they will stand on.

Western propaganda uses half-truths. For example, they emphasize the role of Russian Orthodox religious ideology in the movement. But people here are not religious; for many it is just a symbol, like Catholicism for Northern Ireland.

To try and understand these things is quite difficult. You can only understand it if you put the Ukrainian situation in the context of the world struggle against imperialism and capitalism. Then you can see which side of the spectrum this movement falls on.

It is not a completely proletarian, revolutionary or socialist movement. But it is in this direction, on this side of the class conflict.

I have no recipe for the U.S. and Western left.

I think just to spread some real information about the situation in Ukraine and Donbass would be very good.

In Germany, where our comrade Sergei Kirichuk is now in exile, there is also mass media propaganda for the pro-Western, pro-Kiev position. But there is a strong branch of German society that does not believe this propaganda.

Some of these people even love [Russian President Vladimir] Putin now.

I don’t think they should love Putin, but it shows that in Western society there can be an intellectual opposition to the propaganda.

In the U.S., we see that some critical and social movements are waking up. We see with Occupy Wall Street that there is some discussion in U.S. society about the 1%, so the situation is not one of complete reactionary unity on all questions.

The Ukrainian situation is one that shows how imperialist propaganda has nothing in common with the interests of working-class people in the U.S.

Common people have no interest in supporting the Kiev oligarchy, the fascist junta, this corrupt regime that is trying to suppress the uprising in Donbass. People in the U.S. should not support the suppression of language rights against Russian-speaking people, and so on.

It involves the same questions of democracy, anti-fascism and anti-imperialism apparent in other parts of the world.

Westerners also have the ability to come and see with their own eyes. We have to say thank you to some Western journalists who tell the truth about the situation in Donbass, who go there and publish reports about what they see, like the Scottish journalist Graham Phillips.

He’s not ideological. For example, he doesn’t support the independence of Scotland, so he’s not a dedicated separatist or something. He just sees what is happening and his journalistic ethics don’t allow him to look away. He is not able to make propagandist lies.

With the development of the crisis of imperialism and capitalist structures, critical thinking will rise in the West. We will see a renaissance of critical viewpoints on capitalism and imperialism like in the 1960s or the early 20th century.

WW: What lessons can the global workers’ movement draw from Ukraine?

VS: It’s not just a question of Ukraine, Russia and the EU. This is only the first step in a major shift in the world capitalist system. It may begin in some areas like Ukraine and the Middle East, but it will not end there. It will be all over the world.

We should learn from this situation that there are some social powers which are in favour of war, of destroying existing structures and rights. They are interested in this, they want it, they will support forces like the Right Sector and other Ukrainian fascists, and they will arm them. It will not only be in Third World countries.

Some European countries are already close to this situation. For example, in Greece there is the Golden Dawn, which is something like the Right Sector. I’m sure they have armed militarist squads. When the political struggle develops, it will have a military aspect. We should learn from this situation and see what political blocs are forming.

Some of the people who are formally democratic and progressive, for example some human rights organizations, are on the side of very reactionary, anti-democratic, anti-human rights forces. At the same time, we see that some people who call themselves Orthodox or nationalist are now with us. I think there will be some complicated situations even in the West.

I don’t know that much about the U.S. left, but certainly this is true in Europe. I’ve been in Europe many times. I’ve observed that in a situation where the world system is dissolving and crashing, much of the European left is not trying to go forward, but only to save some social guarantees they had in 1970s or 1980s.

People start to see some of the left as a conservative force. It’s a weak position because their base will only get smaller and smaller.

And we see some far-right and right-populist organizations, which see that the system is dissolving, present themselves to the people as agents of destroying the system, while the left is portrayed as pro-system. So in France, for example, we see that parts of the working class, which voted for communists for years, are now voting for the National Front.

The disintegration of global capitalism poses an enormous challenge for revolutionaries everywhere.