India - The Army of the People 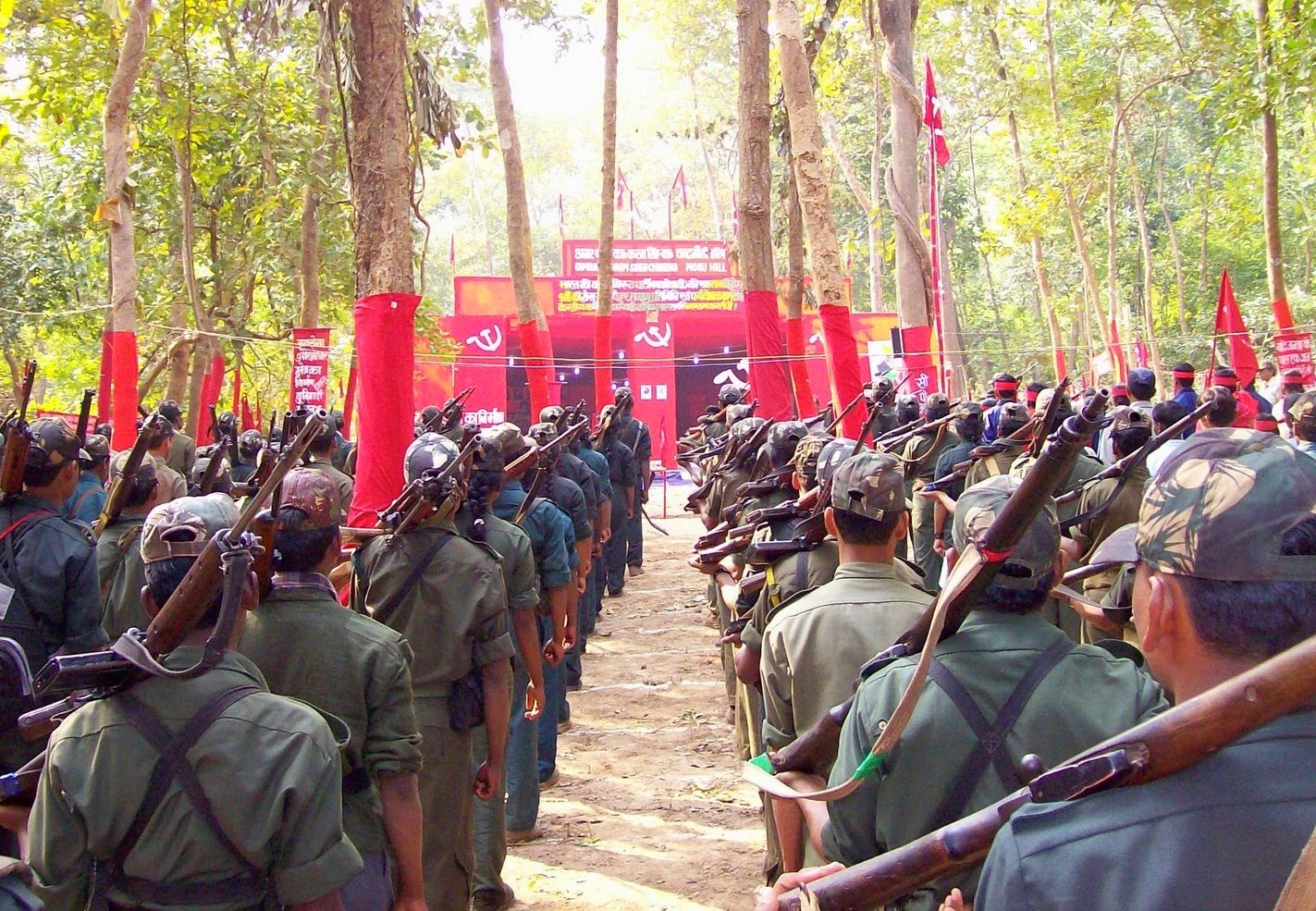 December 2, 2000. This was the day when the oppressed people of India formed their own worker-peasant army, the People’s Liberation Guerilla Army (PLGA). The ray of hope they had been waiting for since decades shone brightly on the Indian revolutionary skies on that day. For the victory of the Indian New Democratic Revolution carried out as an integral part of the World Socialist Revolution, PLGA had been formed as a detachment of the international army of the proletariat.

It gave a deep assurance to the entire oppressed classes, nationalities and tribes of India and to the oppressed people of the world on the day of its birth. Realizing the dreams of our great teachers of Indian revolution, Comrades Charu Mazumdar and Kanhai Chatterjee, to fulfill the aims of our beloved martyr comrades Amulya Sen, Chandra Sekhar Das, Saroj Datta, Sushital Roy Choudhary, Babulal Viswakarma, Johar, Jagdish Master, Panchadi Krishnamurthy, Nirmala, Vempatapu Satyam, Adibatla Kailasam, Babu Bhuja Singh, Diya Singh, Appu and Verghese who played a prominent role in bringing armed struggle to the agenda again in India and with the inspiration of comrades Shyam, Mahesh, Murali, Puli Anjaiah, Prakash Master, Krishna Singh, Srikanth, Bhaktida, David, Suryam, Mahendra Singh, Damodar, Mahender, Reddappa, Snehalata, Padma, Chittekka, Premlatha, Belli Lalitha and other hundreds of such leaders who played a great role in again developing the movement to a higher stage after the temporary setback of the Naxalbari armed struggle and with the inspiration of martyrs Jaheer, Krishna, Sankar and Praveen of the Special Action Team who had sent chills down the spines of the enemy through their brave actions in AP and laid down their lives unflinchingly and with the inspiration of many, many more martyr comrades – the PLGA was formed.

Over the past one decade the PLGA (all its forces included) conducted 990 small, medium and big actions. A total of 2064 enemy police and paramilitary were annihilated and 1993 were injured. 169 landlords, bad gentry, 369 counter-revolutionary gang members, such as the Salwa Judum, Sendra, Harmad Bahini, Shanti Sena, TPC, Ranvir Sena etc marauders, and several informants were also eliminated.

Through these actions the PLGA seized 2109 weapons including high-power rifles, mortars,92,061 rounds of ammunition and military equipment like bullet-proof jackets,communication sets, helmets etc. In these actions it lost 165 brave commanders and fighters including some militia comrades. Of the 2332 martyrs in the last one decade, the huge majority were party members, sympathisers and masses, murdered in cold-blood by the Indian state.

After the formation of the CPI (Maoist) the PLGA has carried out many heroic actions and fought hours long battles, writing new episodes in the annals of the revolutionary armed struggle in India. Two big raids were executed in 2005 in Bihar-Jharkhand — on the Giridih armoury, seizing 193 weapons and ammunition and Operation Jail Break Jehanabad, liberating a total of 388 captives which included revolutionary activists and sympathisers. In Dandakaranya the PLGA attacked the NMDC explosives depot and seized 19 tonnes of gelatin. 900 People’s Militia comrades carried it on their backs to a safe place facing many odds.

Responding to the call of Party’s Unity Congress-9th Congress the first raid which symbolised mobile warfare was conducted in Dandakaranya in Ranibodili. 55 CAF and SPOs were annihilated, 12 CRPF and SPOs were injured, 33 weapons and more than 2,000 rounds of ammunition were seized. In the 2008 ‘Operation Ropeway’ conducted under the joint command of Eastern and Central Regional Commands. Nayagarh District armoury (Odisha) was seized after taking control of the town. Maintaining secrecy, moving forces over long distances, overcoming difficulties in crossing plains, forests and rivers, relying on the masses, implementing C-3 in the best way, the PLGA became skilled in ‘fire and movement’ and in doing military manoeuvres.

In the Rajpur-Bagheila raid and Jhajha raid in Bihar in 2008, the PLGA forces reached the enemy forces in the most secret manner, attacked them with surprise and seized 76 weapons and nearly 2,000 rounds of ammunition after annihilating and controlling the enemy forces. The Rajpur-Baghela raiding party fought hours together (from 10AM to 8PM) to break the enemy’s encirclement and could retreat without any losses.

To help the retreat PLGA units made attacks on enemy at other places. As a result enemy had to withdraw his encirclement. In Silda (Paschim Banga), February 2010, the PLGA raided and destroyed the enemy camp located in an open market, coming on ve- hicles and motorcycles in broad daylight. 24 Eastern Frontier Rifles jawans were annihi- lated and 40 weapons were seized. On April 6, 2010 in the massive ambush at Mukaram conducted in South Bastar by keeping the PLGA guerilla battalion at the core, a company of the enemy was completely decimated. 75 CRPF jawans and a district police constable died and seven were injured.

The PLGA mainly concentrated in implementing the ambush tactics creatively to intensify the guerrilla war further and to develop guerrilla warfare into mobile warfare. In the past decade it won significant successes in this. It has also gained experience in fighting its way out of the enemy’s ‘encirclement and suppression’ campaigns. In 2010, at Mumail, it succeeded in smashing an enemy attempt to encircle and capture leadership comrades, fighting continuously for 30 hours. In 2008, the historic Balimela attack on a motor launch conveying Grey Hounds was an excellent model in applying guerrilla war tactics.

In 2009 the PLGA forces conducted a surprise attack on the Lakhisarai district court and liberated Com. Misir Besra, PBM and CMCM and Eastern Regional Commander- in-Chief. In 2012 a police escort vehicle was attacked by the PLGA in the vicinity of Giridih town and eight comrades including 1 SACM and 2 RCMs were liberated. In the past decade the PLGA has excellently applied mine warfare in the vast guerrilla zones, successfully destroying ‘mine-proof’ vehicles of the enemy. The PLGA forces fought back the tactics of the enemy of deploying the police and paramilitary forces through helicopters by firing on them.

On two occassions they were damaged. It has also effectively used booby traps to harass and attack the enemy. Relying on its intelligence networks  it seized tonnes of explosives by capturing vehicles transporting  them. The PLGA fought back reactionary gangs like Salwa Judum and Nagarik Suraksha Samiti formed by the Indian state by firmly implementing class line and mass line and raising the consciousness of the people. Breaking the economic blockade imposed by the enemy,the PLGA conducted attacks on financial sources and seized money in crores of rupees. 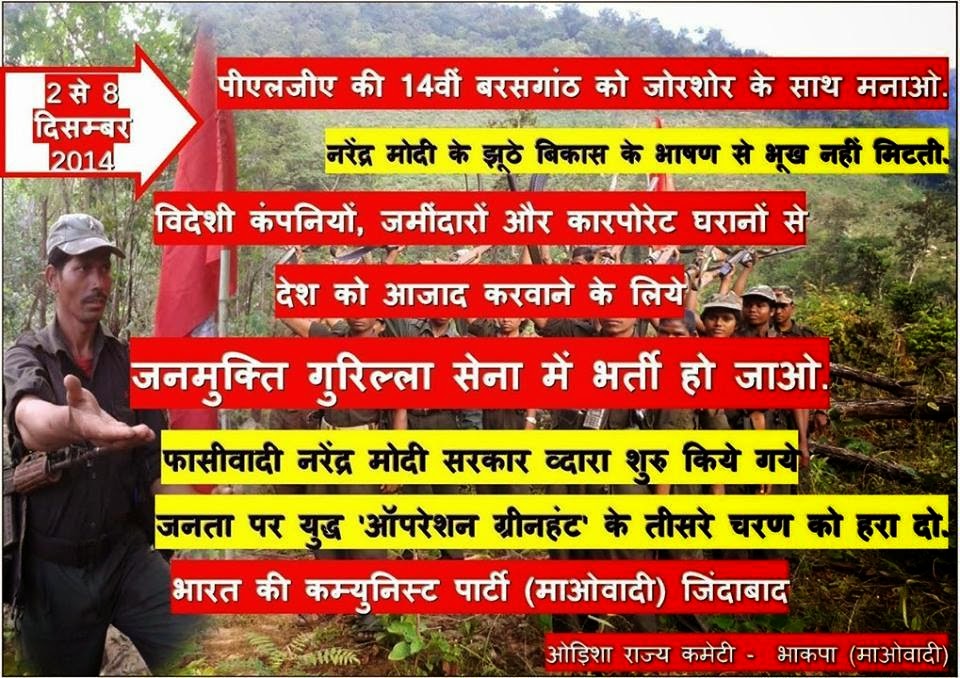 COMMEMORATE 14TH YEAR OF FORMATION OF PL.G.A. FROM DECEMBER 3-8. DO NOT BE FOOLED BY THE LIES AND PROMISES OF NARENDRA MODI LIBERATE THE COUNTRY FROM THE TENTACLES OF MULTINATIONALS,CORPORATE FACTORIES AND LANDLORDS BY JOINING THE P.L.G.A. DEFEAT THE 3RD PHASE OF OF FASCIST WAR OF OPERATION GREENHUNT BY NARENDRA MODI


It is developing its tactics and capabilities to confront and defeat the enemy’s ‘carpet security’ tactics, in which heavily fortified and staffed police/para military camps are put up at short distances from each other, encircling the war zones. Some initial successes were achieved this year at Minepa and Harra Koder (DK). Within the first five months of 2014, spanning the election period, 63 enemy forces were annihilated and 122 injured in 31 actions. One PLGA combatant was martyred. 36 weapons and 3366 rounds were seized. These actions came in the wake of and during two massive country-wide special ‘cordon and search campaigns’ carried out by the enemy.

“This army is powerful because all its members have a discipline based on political consciousness; they have come together and they fight not for the private interests of a few individuals or a narrow clique, but for the interests of the broad masses and of the whole nation.”

The people’s army plays an important role in organising the party in the vast countryside. By carrying out the various tasks such as mobilising, organising, fighting, propagating and participating in production, the people’s army arouses the masses into struggles on their basic and partial demands, makes them active participants in the armed struggle, and raises their political class consciousness to a great extent.

It thus lays the basis for extensive building of the party network among the basic classes. By fulfilling various tasks like conducting continuous revolutionary political propaganda, mobilising the people into various structures (party-people’s militia-mass organisations, RPCs), arming the people, training them, mobilising people into various people’s struggles, participating in agricultural production, education, health and other welfare activities to raise the standard of living of the people and giving medical treatment to people, the PLGA, and the party leading it, won a place in the hearts of people in the various guerrilla bases, guerrilla zones, red resistance areas and other zones.

“The revolutionary war is a war of the masses; it can be waged only by mobilising the masses and relying on them.”
-Mao Tsetung

The people’s militia is the base force in the structure of the PLGA. Without the people’s militia it is not possible for the PLGA to develop as it is the principal recruitment source for the main and secondary forces. Initially armed with traditional weapons, continous efforts are made to equip the people’s militia with modern weapons and to impart politico-military training to it so that it enhances its fighting capacity.

It independently carries out actions seizing weapons and annihilating enemy troops, continously harasses enemy camps, sets up booby traps, and provides sentry to protect the masses. It has also participated in a big way in the operations carried out by the main force of the PLGA. The people’s militias in different regions have been instrumental in defeating the various counter-revolutionary vigillante groups such as Salwa Judum, Sendra, Nagarik Suraksha Samiti and others. 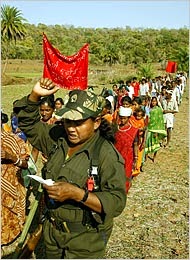