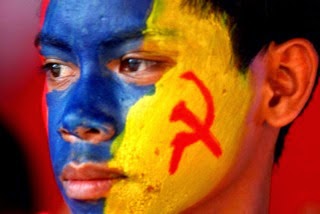 MANILA, Philippines -- The Communist Party of the Philippines turned 46 on Friday, December 26, acknowledging that the “people’s war” it has been waging “is developing unevenly” even as the “central leadership is taking prompt and significant measures to address the disparities.”

At the same time, the CPP, which leads what is acknowledged to be the longest-running Maoist insurgency in Asia, if not the world, said “it is clear that the reactionary armed forces cannot destroy the armed revolution even if the regime commit(s) gross and systematic violations of human rights and even if they can occasionally carry out dramatic arrests and attacks.”

Among these arrests was that of Benito Tiamzon, said to be the CPP chairman, and his wife, Wilma, the alleged secretary general of the Party, who were captured in Cebu in March.

The CPP said President Benigno Aquino III’ administration “is definitely far worse” than that of his predecessor, Gloria Macapagal-Arroyo, noting that the current government has imprisoned “far more people on trumped-up multiple charges of rebellion and common crimes in violation of the Comprehensive Agreement on Respect for Human Rights and International Humanitarian Law and the Hernandez political offense doctrine.”

“It has also detained 14 political consultants of the NDFP in violation of the Joint Agreement on Safety and Immunity Guarantees,” it added.

Aside from this, the CPP said the “Aquino regime is fundamentally as bad as the Arroyo regime in allowing illegal detention, torture, extrajudicial killings, forced evacuations, land grabbing from the peasants and repression of workers and their trade unions.”

Nevertheless, the CPP said that, despite the government’s deployment of 60 percent of the Armed Forces against the New People’s Army in Mindanao, “the people’s war continues to break new ground in several regions” of the south, where the rebels have “largely maintained the initiative and must continue to carry out extensive and intensive guerrilla warfare.”

In past anniversaries -- the CPP’s and that of the NPA, which is on March 29 -- the rebels would boast of the strength and reach of their forces.

For example, when the NPA turned 45 earlier this year, the CPP said “thousands of Red fighters” operate in “more than 110 guerrilla fronts covering significant portions of 71 provinces,” augmented by “tens of thousands of people’s militias and hundreds of thousands of the masses’ self-defense forces.”

It also said it was looking to the “rapid expansion to 25,000 fighters and the growth in the number of its guerrilla fronts to 200, covering every rural congressional district.”

The CPP’s 46th anniversary statement, however, was silent on rebel strength.

In what is probably the most sober assessment it has made recently on the progress of the armed struggle it has been waging for more than four decades, the CPP said: “All in all, the people’s war is developing unevenly in the various regions across the country and among sub-regions and fronts within a region.”

“Some areas are confronted with problems of advance such as the training of commanders to effectively lead NPA platoons, companies and battalions, raising the capability and initiative of people’s militia units and commands, expanding and consolidating local Party sections, raising production and developing socialist relations in land reform areas, building inter-village or municipal-level mass organizations and organs of political power, further revolutionizing the basic mass organizations, developing civil defense systems and sustaining education, medical and economic services during times of war,” it said.

“Others need to address problems at the intermediate or basic levels which have hindered efforts to build critical mass strength and sustain the momentum of advance to a higher level. This includes ensuring the sustained expansion and consolidation of NPA units and striking the correct balance between military work and mass work. This also concerns the proper deployment of NPA forces and building people’s militia units to ensure coverage of guerrilla zones without overstretching NPA units and ensuring their capability to rapidly concentrate sufficient numbers to launch tactical offensives or conduct defensive maneuvers against operating troops of the enemy,” it added.

“The Party’s central leadership is taking prompt and significant measures to address the disparities in the development of people’s war by mobilizing available capabilities and resources and developing various means of cooperation in order to support and boost the efforts of less advanced Party units and NPA commands,” the CPP statement said.

The CPP also laid down 10 “tasks” for its leadership and members to follow: