Cuba: Sanctions failed instruments of US imperialism by Jesus Rojas 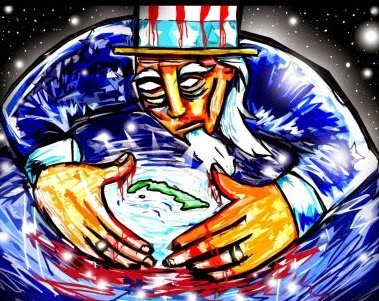 The following article reflects the personal views of Jesus Rojas


US imperialism has finally come to accept the greatest of all failures of all assaults brought against revolutionary Cuba.


The unquestionable truth, that until recently was not recognized by the anti-Cuban lobby worms and imperial strategists, was finally accepted by the president of USA, Barack Obama, when he said:


"We can not keep doing the same thing, expecting a different result (...) We have chosen to cut the anchor of the past, because it is absolutely necessary to achieve a better future for our national interests, to the American people and to the Cuban people. "


Obama acknowledged that more than 54 years of unjust and criminal economic and trade blockade against Cuba have been useless, and today, is completely anachronistic.


Cuba has had to endure countless imperial aggression: a mercenary invasion of Bay of Pigs in 1961; serious threats of being "wiped out" by a US nuclear attack in October 1962; biological warfare in 1971 [1] and mercenary terrorist attacks perpetrated by the CIA [2] that forced the Cuban intelligence to infiltrate the terrorist organizations in Miami to stop their terrorist operations while Cuba; and the most cruel economic sanctions initiated in 1960 which cost irreparable human and material damage, with losses estimated at more than 116,800 million [3], etc.


The economic war and state terrorism by the United States against Cuba has been the high cost that the Cuban people had to pay for daring to challenge the most cruel and arrogant empire known history of mankind; for daring to be free and strive to build on that small little island territory located 90 miles from US shores dream of a society of social justice and equality, socialism.


However, the sudden change in the foreign policy of the Obama administration does not pose a surrender of his plan to destroy the Cuban Revolution, but, on the contrary, a change in strategy to ensure that purpose.


He did know the same occupant of the White House when he said: "... we can do more to support the people of Cuba and promote our values through participation"


Today US intelligence organizations intend to destroy the revolution from within, supporting private enterprise in Cuba to slowly go undermining the conscience of the Cuban people with the perverse anti capitalist values: individualism and selfishness. And also penetrate the Communist Party of Cuba (PCC) with mercenary elements.


But US.underestimates the leadership of the CPC and the Cuban people when he returns to propose another impossibility.


US sanctions proved a failure in Cuba.


However, the Obama administration insists on using the jagged weapon of blackmail, now, against revolutionary Venezuela, Iran and against the Russian Federation.


But imperial acts seem obtuse ignorance of the new world, that multipolarity expressed in several bloks of regional and global powers (BRICS, MERCOSUR, Shanghai Cooperation Council, EU, AU, etc.) and economically-Led by China, which can reduce the weight of their criminal economic sanctions.


New markets today can be replaced without trauma to the US


USA, displaced by new players in the world and powerless at the increasing loss of their hegemony, now attack with more cruelty against all peoples and rebel governments