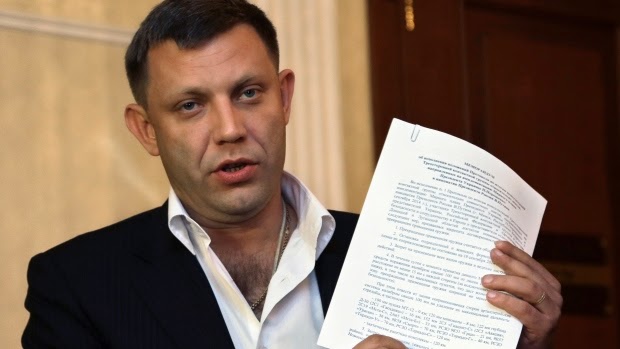 
Democracy and Class Struggle was concerned about this report from Graham Phillips a few days ago from Donetsk about Rinat Akhmetov influence in Donetsk.

We note that Graham Phillips put the reported close relationship of  Zakharchenko's with Akhmetov in quotation marks.

Has someone who is undoubtably brave like Zarharchenko to succumb to the sugar coated bullets of Akhmetov after avoiding the real Kiev bullets would be a modern  Donetsk Tragedy.

Let us hope that Zakharchenko is made of sterner stuff and does not swallow sugar coated bullets.

PS: If someone is described as being made of sterner stuff, they are very strong and determined:

Donetsk certainly has a complicated relationship with the man formerly 'richest in Ukraine', Rinat Akhmetov. His mansion is in Donetsk, Akhmetov being a local, ...having made his fortune through ownership of almost all the coal mines and metalworks in the area - serious business, and key components of Akhmetov's SCM Holdings, worth over $30 billion, he himself valued at over $15 billion.


From the start, he's sought to exert control over the situation here, I remember even back in May in Mariupol his actively encouraging of his plant workers, miners to support 'Ukraine', making several statements in support of Ukraine's remaining as one.

Of course it came from business reasons, Akhmetov's fear all his facilities would be nationalisted under DNR. But he's a clever businessman, with his workers (total numbering 300,000) largely supporting the DNR / LNR, he changed tack, started building relationships here, sending humanitarian aid.

Today in Kirovskoe, a town of some 30,000 (pre-war), where locals tell me '80% of the jobs rely on Akhmetov', people were queing for his humanitarian aid, of course grateful for that.

Yet to many in Donetsk, Akhmetov is hugely unpopular. 'Another oligarch who stole from us, got rich off us.'

His reported 'close relationship' with Zakharchenko has seen Zakharchenko's own popularity take a hit, with people afraid Akhemtov is pulling the strings, planning a comeback.

The reality of any nationalisation of Akhmetov's assets here is it's a long way off - it would be an enormous matter for a new state without, as yet, a defined legal system.

The fight and money Akhmetov would put up to protect his concerns would of course be epic.

And he does now seem to be exerting control from inside the DNR, albeit within certain corridors - his mansion is still being lived in by 'guests', and his own presence here would be hugely contentious, likely even highly dangerous for him.

The fact of a PR stunt is it can also do some good - Akhmetov is sending food to places no one else is. But naturally with his own interests at heart too. It's like Donetsk's relationship with the 48-year-old multi-billionaire - complicated

Everything I wrote to you a month ago confirmed. DNR power - capitalists, even small ones. They do nothing for the economy and welfare. DNR does not power dictatorship of the proletariat, not New Democracy or something else. Do not believe Borotba - this is not a Maoist organization. Rather, it is slid into the right channel of the movement, the more they are defeated.
They were without the masses and were destroyed. In Ukraine, there is no left at all. Anarchists were arranged, the Marxists are broken, and the Communist Party of DNR does not cost anything. This is the end. May soon adopt a new labor code ... He will turn workers into slaves, and the bourgeoisie in the Lord.
DNR and LNR - no different from Ukraine. This is 2 capitalist state. In DNR rampant chauvinism, sexism, poverty and unemployment. Who will be stop this? A bunch of dogs Russia?