Who is Christopher Steele, author of the explosive Trump Russia dossier? 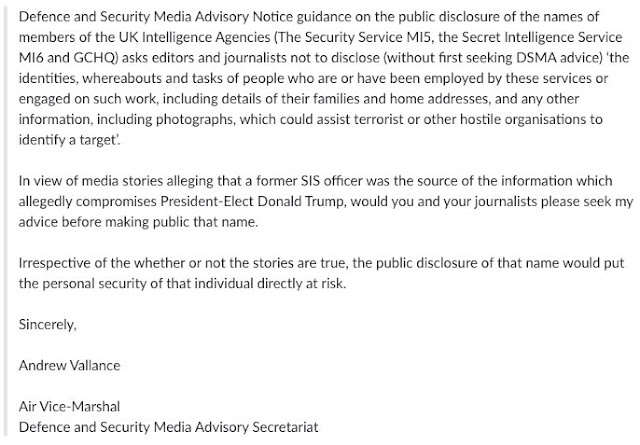 After Christopher Steele’s name was published Wednesday by the Wall Street Journal, the British media received a “D-Notice,” from Andrew Vallance, the Air Vice-Marshal of the Defence and Security Media Secretariat to limit personal information on Christopher Steele but this was subsequently lifted.


Christopher Steele, who wrote reports on compromising material Russian operatives allegedly had collected on US President-elect Donald Trump, is a former officer in Britain's Secret Intelligence Service, according to people familiar with his career.

Former British intelligence officials said Mr Steele spent years under diplomatic cover working for the agency, also known as MI-6, in Russia and Paris and at the Foreign and Commonwealth Office in London.

Mr Steele, 52, has been a director of company Orbis Business Intelligence since it was founded in 2009 "by former British intelligence professionals". According to UK company records, Steele is one of two directors of Orbis, along with Christopher Burrows, 58. The Orbis offices are located in Grosvenor Gardens in Belgravia, close to Victoria Station.

Mr Burrows describes himself on the LinkedIn website as a former counsellor in the Foreign Office, with postings in Brussels and Delhi. He was educated at Cleethorpes Grammar School and Liverpool University.

According to the firm's website, the company is "London-based but with a global footprint".

"Our core strength is our ability to meld a high–level source network with a sophisticated investigative capability. We provide strategic advice, mount intelligence–gathering operations and conduct complex, often cross–border investigations.

The team now draws on extensive experience at boardroom level in government, multilateral diplomacy and international business to develop bespoke solutions for clients.

Our tailored approach means the Directors are closely involved in the execution and detail of every project, supported by an in–house team of experienced investigators and professional intelligence analysts.

Our global network of senior associates is made up of regional, industry and academic experts, as well as prominent business figures. We call upon their expertise and closed network of contacts to help our clients frame business decisions, protect our clients’ reputations, and problem–solve for companies facing complex issues worldwide.

Ethical business practice is a fundamental value for the Orbis Business Intelligence team. Our documented procedures, developed in conjunction with external legal counsel, ensure compliance with relevant UK, US and EU legislation."

Mr Burrows, told The Wall Street Journal, which first published Steele's name, that he could not confirm or deny that Orbis  had produced the reports on Trump.

The director of an intelligence consultancy agency which was said to be behind the dossier containing allegations against US president-elect Donald Trump today refused to comment on the ongoing row.

It was his work on corruption in football that lent credence to his reporting on Trump's entanglements in Russia, US officials said on Wednesday.

According to reports, in the summer of 2010, members of a New York-based FBI squad assigned to investigate "Eurasian Organised Crime" met Steele in London to discuss allegations of possible corruption in Fifa, the Swiss-based body that also organises the World Cup tournament.

At the time, the Football Association was hoping to host the 2018 or 2022 World Cups.

Amid a swirl of corruption allegations, the 2018 World Cup was awarded to Moscow and Qatarwas chosen to host the 2022 competition.

The FBI squad whose members met Steele subsequently opened a major investigation into alleged corruption that led to dozens of US indictments, including those of prominent international football officials.

Steele hired by the GOP to investigate Trump

Mr Steele was initially hired by FusionGPS, a Washington, DC-based political research firm, to investigate Trump on behalf of unidentified Republicans who wanted to stop Trump's bid for the GOP nomination.

The BBC reported that Mr Steele was initially hired by Jeb Bush, one of Trump's 16 opponents in the 2016 Republican primary. It was not immediately possibly to verify the BBC's report.

He was kept on assignment by FusionGPS after Trump won the nomination and his information was circulated to Democratic Party figures and members of the media.

Mr Steele's dealings with the FBI on Trump, initially with the senior agent who had started the Fifa probe and then moved to a post in Europe, began in July.

However, Mr Steele cut off contact with the FBI about a month before the Nov. 8 election because he was frustrated by the bureau's slow progress.

The FBI opened preliminary investigations into Trump and his entourage's dealings with Russians that were based in part on Mr Steele's reports, according to people familiar with the inquiries.

However, they said the Bureau shifted into low gear in the weeks before the election to avoid interfering in the vote. They said Steele grew frustrated and stopped dealing with the FBI after concluding it was not seriously investigating the material he had provided.

Mr Steele had prepared a 35-page document that alleges the Kremlin colluded with Mr Trump’s presidential campaign and that the Russian security services have material that could be used to blackmail him, including an allegation that he paid prostitutes to defile a bed that had been slept in by Barack and Michelle Obama.

Mr Steele's reports circulated for months among major media outlets, including Reuters, but neither the news organisations nor US law enforcement and intelligence agencies have been able to corroborate them.

BuzzFeed published some of Steele's reports about Trump on its website on Tuesday but the president-elect and his aides later said the reports were false. Russian authorities also dismissed them.

The president-elect's press secretary Sean Spicer said: “The fact that Buzzfeed and CNN made the decision to run with this unsubstantiated claim is a sad and pathetic attempt to get clicks.”

Where is Christopher Steele now?

Mr Steele left his home in Surrey on Wednesday morning when it became clear that his identity would become public knowledge.

Associates of Steele said on Wednesday he was unavailable for comment.

Director of National Intelligence James Clapper said on Wednesday that the intelligence community had made no judgment on whether the documents were reliable.