Japan : Historical Revisionism - the Second World War is not over in Asia


Tomomi Inada, Japan's Minister of Defense is an Historical Revisionist does not recognize facts of Japanese Aggression in Second World War.

Tomomi Inada, a lawyer-turned-lawmaker, is a regular at Tokyo's Yasukuni Shrine which honours war dead including convicted war criminals -- a gesture seen by neighbouring countries as an endorsement of Japanese wartime atrocities.

She has made remarks defending the atrocities, including forcing many Asian women into sexual servitude in military-run brothels, and has led a party committee to re-evaluate the judgement of the war tribunal by the Allies.

Here is an extract from an article by Hugh Cortazzi former UK Ambassador to Japan on the extent of Japanese Historical Revisionism. 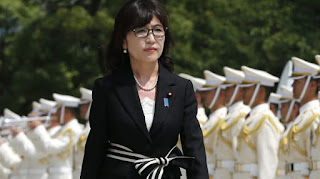 Japan’s right-wing politicians who react badly to foreign criticism are often insensitive to the feelings of foreign people whom they seem to despise. They seem to regard any foreigner who does not praise every aspect of Japan and points out that there were dark moments in Japanese history as a “Japan basher” and, accordingly, an enemy of Japan. This attitude is harmful to Japan’s national interests and reputation.

I was shocked to read in a recent issue of the journal of the Foreign Correspondents Club in Tokyo a farewell article by the correspondent of the Frankfurter Allgemeine Zeitung, which I know from my service in Germany as a highly respectable serious journal that would never report sensational stories and always checks its facts.

"When the correspondent wrote an article critical of the Abe administration’s historical revisionism, the Japanese Consul General in Frankfurt, presumably acting on instructions from Tokyo, called on the paper’s senior foreign policy editor to complain about the article.

The Japanese Consul General refused to produce any facts to counter the arguments in the correspondent’s article and then apparently went on to insult the correspondent and the paper by suggesting that money was “involved,” and that the reporter had to write pro Chinese propaganda to get a visa for China. These remarks were not only unjustified but inept.

Sadly this is not an isolated case. The Japanese Consul General in New York in January requested McGraw-Hill, a reputable U.S. educational publisher, to delete paragraphs in a book produced by two U.S. scholars about “comfort women.” The publishers rejected the request and told the Japanese official that the scholars concerned had properly confirmed the facts.

It is probably impossible now to say for certain how many “comfort women” were forced to serve members of the Imperial Japanese armed forces, but there is overwhelming evidence that this obnoxious practice was widespread. Koreans were not the only women forced into prostitution.

Japanese revisionists also refuse to accept the facts about the Nanjing massacre. In this case, too, it is impossible at this stage to confirm the exact number of those killed, but the evidence from a variety of sources including Japanese confirms that numerous atrocities were committed by members of Japanese forces not only in Nanjing but also elsewhere in China. Anyone who points out such facts is only spelling out the truth and is not a Chinese propagandist.

When I wrote an article some months ago, which noted the fact that there was a dispute over the Senkaku Islands, despite my known antipathy to the anti-democratic behavior of Beijing, I, too, was accused of repeating Chinese propaganda and helping China.

Reports in the British media about Japanese school history books only refer to the downplaying of the Nanking incident and the “comfort women” issue. No mention has been made of what the textbooks say (or do not say) about the thousands of prisoners of war and forced laborers who died in the making of the Thailand-Burma Railway or other incidents in Singapore and Hong Kong when Japanese soldiers broke not only the Geneva conventions but Japan’s own moral code. There is no wish here to rekindle the inevitable resentments, which soured Anglo-Japanese relations in post-war years, but any attempts to water-down the facts or delete them from the record damages relations".