US Marines Landing in Norway a provocation to Russia : Both Norway and the US claimed that the deployment was not aimed at Russia !


After angering Russia by sending thousands of troops to Poland, the United States has now deployed nearly 300 Marines to Norway, prompting serious warnings from Moscow.

The troops arrived in Norway on Monday and will be stationed at a garrison in Vaernes, nearly 1,500 kilometers (900 miles) from Russia. They will be replaced on a six-month rotational basis for at least a year, as part of an agreement between American and Norwegian military officials in October.

This is the first time since World War II that foreign troops are being permanently stationed in Norway, marking a break from a long-running agreement with Russia. 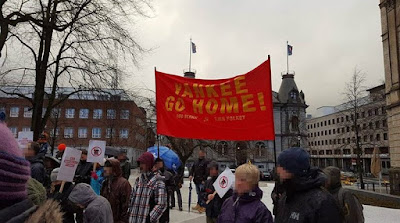 As a founding member of the North Atlantic Treaty Organization (NATO), Oslo had pledged not to host foreign forces on a permanent basis in order to dispel concerns in Moscow that the Scandinavian country might be used as a platform for a surprise attack against its Arctic neighbor.

“The relationship between Norway and Russia is put to a test now,” said Maria Zakharova, a spokeswoman for the Russian Foreign Ministry on Monday, warning that the move “certainly will not improve relations.”

“Instead of developing economic cooperation, Norway is choosing to deploy United States troops on Norwegian soil,” she added.

Back in October, Russia warned Norway against finalizing the agreement, saying the move was “very dangerous.”

Both Norway and the US claimed that the deployment was not aimed at Russia.


Democracy and Class Struggle says practice is worth more than a thousand words - there is a lot of wet dry diplomacy but practical reality is that the build up on the Russian border makes one think of 1941.