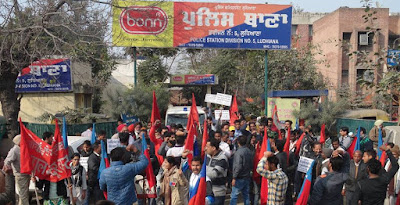 OPPOSE AND RESIST THE FASCIST HINDU RIGHT-WING GIVING ECHOES OF THE S.S.IN NAZI GERMANY.AN ORGANIZED MOVEMENT IS NEEDED TO COMBAT SUCH ATTACKS BY A REVOLUTIONARY DEMOCRATIC SECULAR FRONT.THE TENTACLES OF SAFFRON FASCISM ARE SHARPENING DAY BY DAY AND ALL REVOLUTIONARIES HAVE TO SHARPEN THEIR SWORDS TO THWART IT.

A progressive bookstore, Janchetna, in Ludhiana reopened its doors on Wednesday after the city’s police gave in to popular protests and reversed its decision to seal the store following an alleged incident of vandalism at the shop by the members of a right-wing organisation.

The police’s decision to seal the bookstore came as a response to complaints lodged by members of far-right Hindu organisations that alleged that Janchetna Publishers has been “brainwashing the youth, “promoting anti-Hindu literature” and “propagating anti-India ideology among youth,” according to a report released by the bookstore after the incident.

The goons, who accused Janchetna of “promoting atheism” and “hurting religious sentiments” in their complaint, also submitted texts such as Bhagat Singh’s Why I am an Atheist and Radha Mohan Gokulji’s Ishwar ka Bahiskar as proof of their claims.

The entire episode started on January 2, when Shivani, a 21-year-old local, argued with her parents by insisting on staying at the bookshop against her parents’ wishes. According to the Indian Express, she told police that she wanted to stay at Janchetna and teach poor children.

However, according to Janchetna, once Shivani’s parents realised she intended to participate in the bookstore’s “campaign of promoting and propagating progressive and revolutionary literature” they approached “Hindtuva goons” from the right-wing organisation Shri Hindu Takht, complaining that the bookstore was corrupting the youth by promoting “anti-Indian” ideologies.

As a result, Shri Hindu Takht members, in the passive presence of police, allegedly ransacked the bookstore, “misbehaved” with the store’s manager Binny and manhandled and abused other employees present at the scene. In her complaint to the police, Binny said,“Hindu outfit representatives abused me and said they would put our shop on fire.

They said we were brainwashing youths to leave their religion and family. They also threatened to put all our literature on fire. All this happened in the presence of police and they illegally sealed our shop. Moreover, all titles they have sealed is legal literature being published for years. None of them is banned. We demand an FIR against them