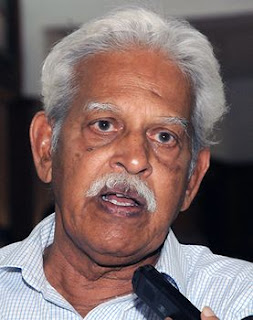 The Centre, along with state governments, has launched a severe offensive against the Maoists.

I am really worried. I fail to understand why the government is punishing Maoists. The real problem is the land issues. Rights of adivasis have been snatched. Though the governments of Andhra Pradesh and Odisha passed land bills, giving rights to adivasis and saying that non-adivasis could not acquire land in the forests, in actuality the reverse is happening.

How is the government helping non-adivasis acquire land?

Has that battle now entered a decisive stage?

Yes, it seems so. The onslaught would finish by next year. My question to him [Modi] is, why is he taking it as a war? The mission will kill adivasis. His policy is: remove the water, and the fish would ultimately die. His war is not against Maoists but against adivasis. Maoists are supporting adivasis in the jungles. So he wants to kill Maoists and ultimately the adivasis would die.

But what is wrong with private investment in mining? It would develop the economy.

How could that be? A large number of adivasis would be displaced. The huge displacement would create a massive law and order situation. [There would be] poverty as these people rely heavily on forests.

How will Mission 2016-17 be different from Operation Green Hunt?

Now it is an all-out war, unlike in the past. The government is using aerial strikes. The state governments, which wanted to crush the Maoist movement, received a great fillip when Modi became prime minister.

But why would the Modi government be more aggressive than previous Congress governments?

Because Modi’s political ideology is based on the theory of anti-communism. He views communists as enemies, more than other parties do. So, he is the fiercest and wants to finish Maoists as early as possible. Also, this government follows a World Bank-guided economic model, which would ask the government to open the mining sector to multinationals.

A top Maoist leader told THE WEEK that Maoists would abandon guerrilla action. Is it possible?

I am not sure. But the new generation of Maoists is different. Even if they do away with guerrilla war, they cannot abandon the struggle and revolution. Otherwise, they would not be called Maoists