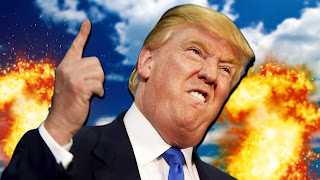 Democracy and Class Struggle says a smoke and mirrors peace policy to stiff Russia and China and Iran and North Korea from Trump.

Looks like Russia wants to get stiffed but don't count on China and North Korea and Iran following suit.

Missile defense against Iran and North Korea is an old ploy to get Russia and China stiffed.

Trump is gaming everyone.


Donald Trump has announced plans to develop a missile defence system to protect the US against attacks from Iran and North Korea.

Within minutes of his inauguration as US President, Mr Trump's administration said it would develop a "state of the art" system.

It did not provide details on whether the missile defence system would differ from those already under development, how much it would cost or how it would be paid for.

In a policy statement on the White House website, Mr Trump's administration said the move was part of its strategy to "rebuild our military".

On the President's campaign website, Mr Trump's team said it would invest in the system to "meet growing threats" and "counter the ballistic missile threat from Iran and North Korea".