Trump and Netanyahu talk Jerusalem and Syria and Iran 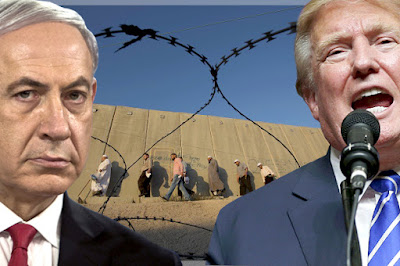 Democracy and Class Struggle says the corrupt duo are gathering the storm clouds for Spring Thunder.


Israeli Prime Minister Benjamin Netanyahu says he will hold a telephone conversation with US President Donald Trump, their first talks since the billionaire businessman’s inauguration, to discuss three major issues.

Speaking at the beginning of a cabinet meeting on Sunday, Netanyahu said he intended to discuss the Palestinian issue, the situation in Syria and the alleged Iranian threat with Trump later in the day.

The Israeli premier said in December that Trump would be a good friend to Tel Aviv, adding, “I know Donald Trump…And I think his attitude, his support for Israel is clear."

Israelis have welcomed Trump's election and expressed hope it would allow them to move forward with their goal of annexing most of the occupied West Bank.

In an initial step, Israeli regime officials on Sunday approved the construction of 566 new Israeli settler units in East Jerusalem al-Quds, despite international calls to end the unlawful practice.

The landmark resolution called Israeli settlements in the West Bank and East Jerusalem al-Quds a “flagrant violation of international law” and demanded that Israel stop all such construction.

Over half a million Israelis live in more than 230 illegal settlements built in the occupied Palestinian territories, including East Jerusalem al-Quds since 1967.

The presence and continued expansion of Israeli settlements in occupied Palestine has created a major obstacle to efforts to establish peace in the Middle East.

Meanwhile, Netanyahu’s remarks about discussing the issue of Syria with the new American president come at a time that Syria has repeatedly announced that Tel Aviv and its Western and regional allies are aiding and abetting Takfiri militant groups operating inside the Arab country's legitimate government.

The Israeli regime has even set up field hospitals in the occupied Golan Heights to treat wounded Syrian militants.

Although Israeli officials refrain from announcing the exact number of terrorists who received treatment in Israeli hospitals, Israel’s Channel 2 reported in March 2016 that the wounded militants were transferred quietly and that the number of them had reached 2,100 since 2011.

The Syrian army has repeatedly seized huge quantities of Israeli-made weapons and advanced military equipment from the foreign-backed militants inside Syria.

Israeli lawmaker, Akram Hasoon, posted a status on his Facebook page on September 11, 2016, claiming that Jabhat Fateh al-Sham was bombing the Syrian village of Khadr through direct support of minister of military affairs, Avigdor Lieberman.

Hasoon added that the village of Khadr had been target of persistent bombardments by Jabhat Fateh al-Sham militants.

“We have gotten information from all fronts and from people who are responsible within the village that the Nusra Front is operating with unprecedented support from Israel, because the organization’s fighters are advancing in those places where the Israel … had previously bombed Syrian positions and the organization is holding those positions, in addition to the logistical and medical assistance it’s getting from Israel” he said.

Elsewhere in his comments, Netanyahu strongly opposed the 2015 nuclear agreement between Iran and the P5+1 group of countries, including the United States.

The premier said stopping what he described as the “Iranian threat” and overturning the nuclear deal continues to be a key objective of Israel.

During his presidential campaign, Trump had promised to annul the deal which he referred to as a "disaster" and "the worst deal ever negotiated."

Iran and the five permanent members of the UN Security Council – the United States, France, Britain, China and Russia – plus Germany reached the nuclear agreement, known as the Joint Comprehensive Plan of Action (JCPOA), in July 2015 and started to implement it on January 16, 2016.

Under the JCPOA, Iran undertook to put limitations on its nuclear program in exchange for the removal of nuclear-related bans imposed against Tehran.

Israeli intelligence officials on Friday warned Netanyahu against pushing Trump to tear up the JCPOA.

“There is concern that revoking the pact would cause a chasm between Washington and the other signatories, most importantly Moscow and Beijing,” the Israeli daily Haaretz quoted the officials as saying.