James Mattis US defense secretary to Europe: US committed to NATO 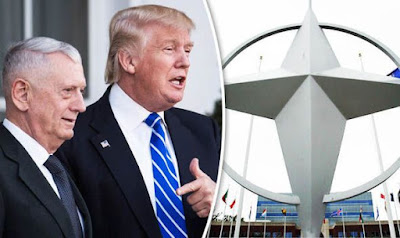 Democracy and Class Struggle says with the 100% behind NATO comment from Theresa May on Trump in USA following private conversations and the public statement of US Defense Secretary James Mattis to Europeans on NATO.

Who in Russia can retain the Trump Delusion anymore ?

Maybe some Russian Bourgeois Diplomats and Analysts  ? Certainly not the more rational and sane military staring at in your face NATO forces on Russian borders,

Both Russian and Chinese Military have a materialist analysis of the NATO threat - Trump is your enemy wake up !


US Defense Secretary James Mattis has told his German and French counterparts that Washington under President Donald Trump will remain committed to the North Atlantic Treaty Organization (NATO) alliance, according to the Pentagon.

In a statement on Friday, Pentagon spokesman Navy Captain Jeff Davis said that Mattis had spoken on the phone with German Defense Minister Ursula von der Leyen and "assured the minister of the United States' enduring commitment to the NATO alliance."

The spokesman said that Mattis had also admired Berlin’s role in the fight against the Daesh (ISIL) terrorist group and pledged further cooperation with his European counterpart in the future.

"He thanked Minister von der Leyen for her country's leadership in NATO activities on the Eastern Flank and in Afghanistan, and acknowledged the role that Germany plays in fighting terrorism, specifically in the counter-ISIL coalition," Davis said.

"He also cited the strategic importance of Germany as the host to 35,000 US personnel, the largest US force presence in Europe," he noted.

In a different call with French Defense Minister Jean-Yves Le Drian, the Pentagon chief stressed the importance of NATO, discussing "the long-time allies' security cooperation, which is stronger than ever as both countries engage side-by-side in the fight against terrorism."

The remarks were made after Trump, earlier this month, caused alarm in NATO as he called the Western military alliance "obsolete", arguing that NATO is as an alliance through which the US is spending tremendous funds to protect other extremely rich countries and that many NATO member states were not paying their fair share for US protection.

During his presidential campaign, the billionaire businessman had also appeared to be conciliatory towards Russia, praising President Vladimir Putin.

The US accounts for nearly 70 percent of the NATO budget and has long urged its European allies to step up their contributions, particularly in the face of what Washington calls the “Russian aggression” in Ukraine.