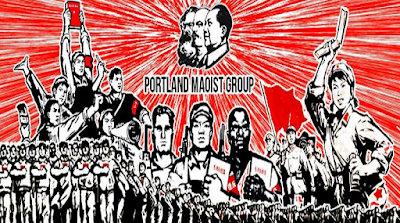 The world is in crisis. Capitalism-Imperialism is tearing the world apart at its seams, forcing the majority of the world into brutal poverty. This crisis demands a solution, a solution which addresses all who feel the burden of capitalism.

For decades in America we have continually sought new solutions to this now old problem of capitalism while the world has passed us by. People around the world continue to wield Marxism against capitalism and win.

We Portland Maoist Group decide to side not just with the world’s revolutionary peoples, but history. Instead of waiting for a new solution to fall from the sky, we will build on the history of Marxism and refine Marxism-Leninism-Maoism.

We are Marxist-Leninist-Maoists. MLM is Marxism for the current era. It is the revolutionary theory towards the eradication of all oppression, forged through the practice and reflection of the history of the communist movement. MLM particularly draws from four great revolutionary movements; the Paris Commune, the Bolshevik Revolution, the Chinese Revolution, and the Great Proletarian Cultural Revolution.

For our work in Portland, the application of MLM demands the orientation of our politics and practice towards the masses. Who are the masses? The masses are the working-class; the oppressed and the exploited. All those who stand to gain from the final defeat of capitalism, with those with nothing to lose at the center.

The proletarians, who are the majority of society. MLM demands our work be guided by the pressing needs and liberatory aspirations of the masses, and that we facilitate the development of strategy and organization to meet these aims.

We recognize that the capitalist mode of production is a system built on the backs of the working class. One where value produced through labor is extracted from the masses in order to accumulate capital and wealth for the ruling capitalist class (bourgeoisie).

As communists, we aim to do away with these relations and establish socialism. In order to realize this goal, we understand that we must wage revolution against the capitalist class, pulverize and utterly destroy its systems of bourgeois class rule and replace them with proletarian class rule. We do not accept that profit and capitalism must be the motive force of the economy.

We are fighting to build communism through revolutionary socialism. Socialism is the period following the overthrow of societal control by the bourgeoisie (capitalists), and the seizing and collectivization of the infrastructure and tools of/for production.

In this period of socialism, the proletarian masses must go about rooting out bourgeois ideology in all corners of society to strengthen proletarian class rule over society and advance towards communism. Communism is a stateless, classless and egalitarian society.

History has proven that the toiling classes must first strip power from the bourgeoisie and their allies in order to march towards this revolutionary goal. The communist movement moves to guarantee healthcare, housing, food, education and employment to all, through the distribution of the spoils of labor and the building and deepening of proletarian class rule.

As the struggle against patriarchy continues and develops so shall we. We see women and non-men as integral members and necessary leaders of a revolutionary proletariat, as such we reject patriarchal oppression in all its manifestations and seek to eliminate it in the left and in society.

We are committed to recognizing the labor of women and non-men in its entirety, and seek to build a revolutionary, anti-patriarchal movement worthy of their support. This includes full recognition and support of all gender related identities, and a dedication to ensure all revolutionary spaces we organize in actively combat patriarchal and male-chauvinist behavior.

As Marxists, we locate patriarchy as a tool the ruling bourgeois class uses to extract value from labor, including reproductive labor and other forms of unrecognized and uncompensated work that women and non-men do.

This means patriarchal oppression is a site of the class struggle. The defeat of capitalism must necessarily be coupled with the elimination of patriarchy.

As proletarian feminists we aim to struggle against, defeat, and finally eliminate patriarchy, for the liberation of all people from patriarchy and capitalism around the globe.

We understand that national liberation struggles for many peoples must take place against their colonial oppressors alongside a struggle for liberation from the yoke of capitalism.

We support the pursuits of revolutionary nationalists in the liberation of their nations from imperialism, the highest stage of capitalism.

We seek to build unity between ourselves and revolutionary nationalists to build the foundations of proletarian internationalism, towards the solidarity of all oppressed nations against capitalism, imperialism, and white supremacy.

As organizers within the the belly of the beast, we understand how vital anti-imperialist struggles are and support them worldwide. Across the world, the interests of the masses of oppressed people are the same and our struggles are linked.

A victory in Palestine is a victory for Standing Rock.

Every African freeing themselves from colonial rule strikes a blow to American imperialism and is an indigenous person in America moving closer to their own liberation.

The advances of the revolutionary movements in India, the Philippines and elsewhere bring the whole world closer to proletarian victory. Capitalism cannot exist in isolation, as such, the struggle against capitalism is a worldwide struggle.

We are Portland Maoist Group.
We are Marxist-Leninist-Maoists.
We are anti-Imperialists.
We are against patriarchy.
We Dare to Win!