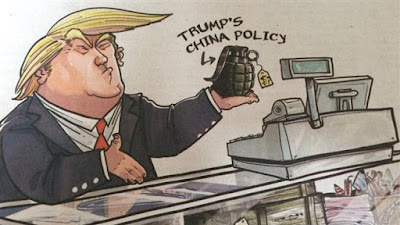 Chinese state media say incoming US President Donald Trump is “playing with fire” by challenging China’s sovereignty over Taiwan, promising that Beijing would strongly respond to any reconsideration by the US of the so-called One China policy.

The English-language newspaper Global Times published an article on Monday warning that Trump’s repeated threats to abandon the policy, which recognizes Chinese sovereignty over Taiwan, could no longer be dismissed as “bluster or miscalculation” and that Beijing would be ready for a “costly” battle.

The daily also published a cartoon (see above) that shows the businessman holding a hand grenade labeled “Trump’s China policy.”

Trump, who will take the oath of office on Friday, has said he does not see why he should be committed to the “One China” policy — a longstanding US practice in foreign policy — unless Beijing made concessions in trade. Washington has been maintaining only unofficial ties with Taiwan since 1979.

“If Trump is determined to use this gambit on taking office, a period of fierce, damaging interactions will be unavoidable, as Beijing will have no choice but to take off the gloves,” read the article by Global Times, which is published by China’s ruling Communist Party.

Trump first angered China after his election win in November 2016 by taking a congratulatory phone call from Taiwanese leader Tsai Ing-wen in a major break from US diplomatic protocol in 37 years.

“In the past, Trump infuriated us, but now we find him risible,” the article on the Chinese daily read.

The US president-elect repeated his anti-China remarks in an interview with The Wall Street Journal on Friday. He said the “One China” policy was “being negotiated.” China has said its sovereignty over Taiwan is “non-negotiable.”


Democracy and Class Struggle says that Trump with his smoke and mirrors foreign policy which will be more continuity than rupture with past US Foreign Policy is confusing (even deluding) Russia but not China or Iran or North Korea.

If Russia wants to play games with Trump at expense of Iran, China and North Korea - Kissinger's wet dream then they play at their own future cost.