Iran : Navy maneuver's Velayat 95, would be held in the north of the Indian Ocean in February. 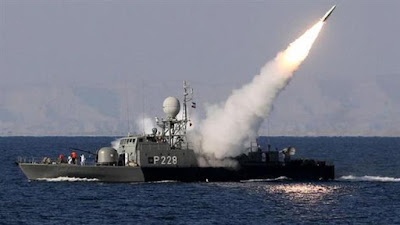 Democracy and Class Struggle says with Trump in the White House using anti Iranian rhetoric to get there Iran develops it defensive posture - in preparation for whatever my come in 2017.


Iranian naval forces plan to stage a large-scale drill to boost and put on display the country’s military prowess.

Iran's Navy Commander Rear Admiral Habibollah Sayyari told reporters on Saturday that the country's biggest naval military maneuver, code-named Velayat 95, would be held in the north of the Indian Ocean in February.

“This maneuver will show the Islamic Republic of Iran’s power in the international scene,” he said.

He added that Iran’s Navy attached special importance to defense missions and presence in the high seas, including the Gulf of Aden and the Bab el-Mandeb, to protect commercial vessels and tankers.

In line with international efforts against piracy, the Iranian Navy has been conducting patrols in the Gulf of Aden and the strategic Bab el-Mandeb Strait to safeguard maritime routes used by the country's vessels and oil tankers. Iran’s Navy has managed to foil several attacks by pirates on both Iranian and foreign vessels during its missions in international waters.

“A Fateh-class submarine, Sahand destroyer and another missile-equipped warship will join the Navy … in the near future,” the commander said.

Iran’s Navy staged Velayat 94 military maneuvers in January 2016 across a large swath of territorial waters and high seas in the Persian Gulf, the Strait of Hormuz and the Indian Ocean.

During the drills, various types of Ghadir-class and Tareq-class submarines detected and tracked the mock enemy’s mobile targets and destroyed them by firing advanced and overhauled torpedoes.

Iranian naval forces also successfully test fired Nour (Light) surface-to-surface cruise missile which has a range of 150 kilometers. Nour cruise missile has an accurate impact precision, good velocity, high detection power and powerful warhead. It could be launched both from sea and surface.

In recent years, Iran has made major breakthroughs in its defense sector and attained self-sufficiency in producing important military equipment and hardware.

Iran has also conducted major military drills to enhance the defense capabilities of its armed forces and to test modern military tactics and state-of-the-art army equipment.

The Islamic Republic maintains that its military might poses no threat to other countries, stating that its defense doctrine is merely based on deterrence.