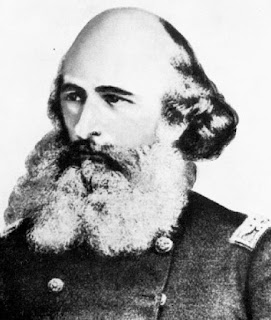 I remember reading Labour's Untold Story by Boyer and Morais many years ago and discovering there were communists in the United States long before they appeared in Russia  - and one name that stood out was Joseph Weydemeyer who helped  Marx with the philosophical study the German Ideology.

Today when we are witnessing the birth of a new Marxist Leninist Maoist Movement in the United States we should remember we had a lieutenant colonel in the Union Army fighting against slavery.

Communists fighting for social justice in America has a long history and they have many victories to their credit - but a new one is on the horizon the dumping of Trump and the capitalist imperialist system that give rise to this perverse individual.

Joseph Arnold Weydemeyer (February 2, 1818, Münster – August 26, 1866, St. Louis, Missouri) was a military officer in the Kingdom of Prussia and the United States, as well as a journalist, politician and Marxist revolutionary.

At first a supporter of "true socialism" he became, in 1845-46, a follower of Karl Marx and Friedrich Engels. He became a member of the League of Communists. From 1849 to 1851 he headed its Frankfurt chapter.

He visited Marx in Brussels, staying there for a time to attend Marx’s lectures. He participated in the 1848 Revolution. He was one of the "responsible editors" of the Neue Rheinische Zeitung from 1849 to 1850.

He was involved in the writing of the manuscript of the Deutsche Ideologie (German Ideology).

He worked on two socialist periodicals which were the Westphälisches Dampfboot (Westphalian Steamboat) and the Neue Rheinische Zeitung.

In 1851 he emigrated from Germany to the United States and worked there as a journalist.

The Eighteenth Brumaire of Louis Napoleon, written by Karl Marx, was published in 1852 in "Die Revolution", a German-language monthly magazine in New York, established by Weydemeyer.