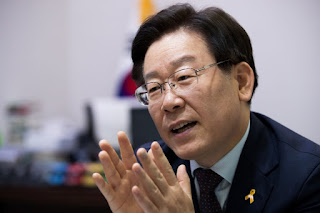 The rise of Lee Jae-myung - Lee styles himself as the Korean Bernie Sanders, railing against economic inequality and corporate privilege.

He has a very different perspective on security issues, and sharply antagonistic opinions as to America’s role.

He recently complained that U.S.-ROK ties had “degenerated into a subordinate relationship where we give whatever amounts of money they ask us to give.”

Instead, he argued, “The U.S. should be begging us for the defense of East Asia.” He suggested defenestrating America’s nearly 29,000 troops, renegotiating the bilateral free trade agreement, and talking with North Korea’s Kim Jong-un.

Democracy and Class Struggle says at least one sensible candidate in the South Korean Presidential Election.