Which dog bark on Israel ? Kerry or Trump ? Opportunist Theresa May decides to bark for Trump 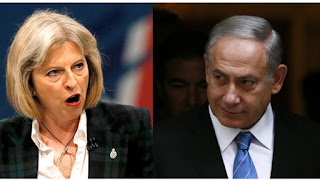 Theresa May's First Signs of subservience to the Donald


Prime Minister Theresa May has distanced the UK from Washington after Secretary of State John Kerry delivered a strong rebuke of Israeli policies in the occupied Palestinian territories.

Kerry delivered a keynote speech this week that criticized Benjamin Netanyahu’s cabinet as the “most right-wing coalition in Israeli history,” and warned that the rapid expansion of settlements was “leading toward one state and perpetual occupation.”

As a result, the outgoing secretary of state said the so-called two-state solution was in “serious jeopardy.”

May’s spokesman said the prime minister believed it was "not appropriate" to attack the composition of Netanyahu’s cabinet or focus solely on the issue of Israeli settlement construction as "the only problem in this conflict."

“The government believes that negotiations will only succeed when they are conducted between the two parties, supported by the international community,” he said.

“We continue to believe that the construction of settlements in the occupied Palestinian territories is illegal, which is why we supported UN Security Council Resolution 2334 last week,” May’s spokesman said.

However, he said the prime minister was concerned about the language Kerry had used against Israel.

The US State Department issued a blunt response to May’s statement, saying Kerry’s remarks were “in line with the UK’s own longstanding policy and its vote at the United Nations last week.”

May’s stance appears to be designed to build bridges with the incoming Donald Trump administration.

Trump harshly criticized the Obama administration for allowing the UN resolution to pass and urged Israel to “stay strong” until January 20 when he takes office.

The resolution was passed in a 14-0 vote on Friday after the United States decided to abstain – and not veto – the measure. The decision angered Netanyahu, who accused Obama and Kerry of being behind the “shameful” act.