India: Salute heroic Resistance of Farmers all over Punjab by Harsh Thakor 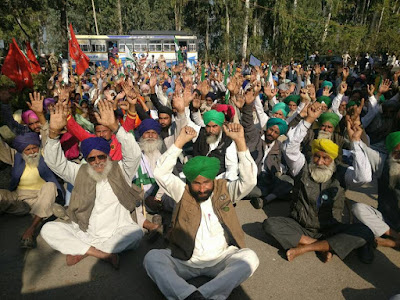 SALUTE HEROIC PROTEST OF FARMERS ALL OVER PUNJAB RADIATING THE SPARK OF RESISTANCE AGAINST THE RUTHLESS POLICIES OF THE RULING CLASSES.HAIL THE UNITY OF LANDED PEASANTRY WITH LANDLESS AGRICULTURAL LABOURERS

The framers gheraoed the homes of the ministers of all the districts displaying their great resilience to win justice and showed great determination in resisting the police blockade in Moga.

The gatherings were particularly large at Bathinda and Patiala with around 3000 people assembling.It testified the great potential of the Punjab peasantry to convert a spark into a prairie fire and the importance of a united front of organizations from so many trends.

Above all it  raised the demands of the landed peasants and the landless dalit labourers which would lay a base for unity of the landed and landless sections of peasantry and not isolate the dalit landless community..

He was taken to the Civil Hospital here, from where he was referred to Government Rajindra Hospital in Patiala.

The protesters came to know about the incident when Darshan started vomiting there. Some people said he consumed some poisonous substance as he was under a lot of stress due to debt.

Earlier, the protesters gathered at the local BSNL Park here, from where they marched towards the residence of Dhindsa while raising slogans against the government and in support of their demands.

The demands include loan waiver for debt-ridden farmers and farm labourers, 10-marla plots for landless farmers and labourers for constructing houses and cancellation of “dummy auction” of panchayat land reserved for SCs in Jhaloor village (near Lehragaga).

The protesters raised slogans against Tota Singh, accusing him of the pesticide scam and the supply of substandard seed that resulted in repeated crop failures and the whitefly attack in the last few years.

“Farmers and farm labourers are under great stress, resulting in suicides. The government needs to come to the farmers’ assistance.”
Posted by nickglais on 12/22/2016 04:03:00 AM