Syria: The Turkish army has bombarded villages in western of Manbij in Rojava-Northern Syria with phosphorus bombs according to reports. 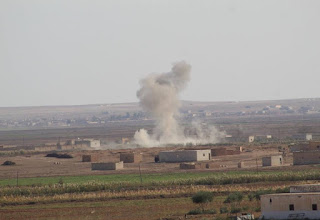 The Turkish army has bombarded villages in western of Manbij in Rojava-Northern Syria with phosphorus bombs according to reports.

Shervan Derwish the spokesperson of Manbij Military Council (MMC) has said the Turkish army on Wednesday morning has used phosphorus bombs in the shelling Qert Weran, Girhuyok, and Qawiqli villages in western Manbij.

Derwish said that the villages are residential areas where a huge population lives, which could lead to a massacre if it continued.

The Turkish army have been using airstrikes in and around Manbij to attack MMC and Syrian Democratic Forces for the past 15 days.