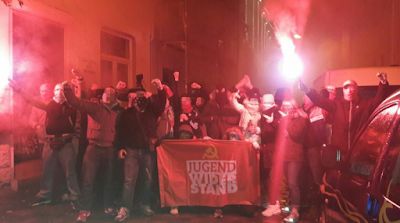 We are proud and glad to announce the founding of a section of Jugendwiderstand in Bremen!

This is another great step forward for our work, and for Bremen, a relevant step in view of developing the revolutionary movement in the “Hansestadt”.

On Saturday evening, we celebrated the founding together with working-class youth from the city in a high-spirited setting. There was an opening speech by the Bremen comrades, which focused on the specific situation of the youth and the working class in Bremen.

The central leadership of Jugendwiderstand concluded with an ideologically very pointed and clear speech. In addition, a greeting from SYM – Socialist Youth Movement was read out, which once again congratulated the Bremen comrades on the founding.

Afterwards, a buffet was opened, alcohol was served, and the founding was fittingly celebrated in proletarian fashion. This was followed by a cultural program. Taktikka from Berlin and the Bremen underground rappers Detweiler and Abb4z put on an awesome performance for about 30 to 40 comrades and guests.

The celebration continued into the night, during which this little mobilisation video was made. It may gladly be understood as a message to the Bremen Nazis, anti-Germans and other reactionaries and fascists. Brace yourselves, because the energy of the comrades in Bremen is great!

An excerpt from the speech of the Bremen comrades:

“300 GHB workers will be laid off and replaced by cheaper and even more exploitable temporary workers, leaving 300 parents from our proletarian class unemployed.

From our city, Atlas Elektronik supplies German imperialism with the necessary weapons that it needs in order to distribute them all over the world to its lackeys and servants who are directed against the oppressed.

People who see no more sense in themselves and society wander through the streets here in the neighbourhood and grope women and endlessly sell drugs to the desperate, resigned youth.

The ugliest and most rotten lumpen pigs Bremen has to offer can be found over and over again as BSAG transit inspectors, who put young people in jail because they can’t afford a fucking ticket.

The pigs that only ever pull out blacks during their controls are of no help if it isn’t directly about property offences and you’re a filthy rich white man. They protect this state, which cements these conditions. They only protect those at the top who through this shit lead lives of luxury.

All of Bremen hates the police – and that’s a good thing!

Whether you’re being exploited as an apprentice, exam pressure is making you sick, or if your brothers and sisters are messed up on drugs, it’s because this city is like a giant, cold, damp open-air prison.

If you’re not from Schwachhausen or Oberneuland, then you know what we’re talking about. Then you have experienced this shit first hand. Outside the FRG, it’s usually even worse, especially in the oppressed nations.

Imperialism has transformed the whole world into a single slaughterhouse.

In Palestine, an entire people has been expelled and slaughtered, oppressed and colonised for years. In Kurdistan, a mad fascist slaughters an entire people and burns people in cellars in his chauvinist racial fanaticism.

Global imperialism, especially Yankee imperialism, produces millions of refugees who seek refuge here in torrents and are hunted down and beat up here by raging fools and fascist pigs.

The stone-throwing youth in Palestine has become a symbol for the youth of the whole world. A symbol of resistance. A bringer of hope. Their fight lives in the battle calls of the rioting youth in the suburbs of Paris. Their struggle is ours.

On all continents, the peoples of the world are leading the struggle against imperialism. In Peru, in India, in Turkey, in Kurdistan, in Manipur, in the Phillipines, the communist parties lead the masses in People’s War, thereby forming the spearhead of our class on an international level.

Whoever does not acknowledge this and fully support it is not a communist!

We are part of a worldwide movement that will end this shit!

In Germany, we are doing our part to build up the communist party and to sweep away with an iron proletarian broom all oppressors, exploiters and warmongers off the planet!

We have no desire to resign and give up. We are too proud for that. We are taking up the fight. We demand nothing less!