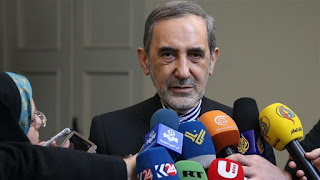 A senior Iranian official has criticized a US Senate vote to extend the Iran Sanctions Act (ISA) for 10 years, saying the move is Washington’s revenge for the recent achievements made by Iran and its allies in the Middle East.

“It seems that this [move] is [the US] revenge for successive and valuable achievements made by Iran and its allies in the region, but it will not be successful,” Ali Akbar Velayati, senior adviser to Leader of the Islamic Revolution Ayatollah Seyyed Ali Khamenei on international affairs, said in a meeting with Russia's special envoy on Syria, Alexander Lavrentiev, in Tehran on Saturday.

He added that such an “inhumane” move by the US to approve the extension of sanctions was a “blatant violation” of last year’s landmark nuclear agreement, known as the Joint Comprehensive Plan of Action (JCPOA), between Iran and the P5+1 group of countries.

It also shows the anger of the US and its elements at the recent victories made by Iran and its allies in the region, he reiterated.

“The Islamic Republic of Iran will resist against any JCPOA breaches and is quite ready to retaliate in kind,” Velayati said.

He emphasized that Iran would strongly continue to use nuclear energy for peaceful purposes in line with international regulations.

“That would not be right that an agreement is signed on one hand and sanctions are re-imposed [against Iran] under different pretexts such as human rights and [alleged] support for terrorism on the other hand,” the senior Iranian official said.

Velayati added that it is “really ironic” that the US, which is a sponsor of different terrorist groups, wants to punish Iran under the false allegation that the Islamic Republic is supporting terrorism because it backs the Lebanese resistance movement, Hezbollah.

The US Senate on Thursday unanimously voted to extend the Iran Sanctions Act for one decade after it easily cleared the House of Representatives last month.

The ISA was first adopted in 1996 to punish investments in Iran over its nuclear program.

The bill needs to be signed into law by US President Barack Obama.

In the meeting with the Russian diplomat, Velayati said Tehran and Moscow should make constant efforts to develop relations.

“New conditions have been created in the region and the international scene, which reminds us that Iran-Russia relations must continue to move forward,” the Leader’s adviser said.

Velayati said futile attempts have been made to damage Iran-Russia relations.

He said West Asia, Central Asia and the Middle East would face a “very sensitive” situation in the future and stressed that Iran and Russia must further boost relations to counter the existing threats.