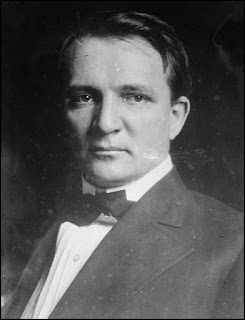 There now sits Lenin, short-built and stanch-built, gray-eyed and bald-headed and tranquil. He wears a woolen shirt and a suit of clothes bought, one would think, many years ago and last pressed shortly afterward. His room is quite still. As he has denounced "the intoxication of the revolutionary phrase," so he seems to reject the intoxication of revolutionary excitement.

He busies himself with reports and accounts of departments on his desk and receives visitors for stated lengths of time - ten minutes, five minutes, one minute. He is likely to receive them standing. He speaks to them with the low voice of the man who does not need to raise his voice.

In his ways of easy authority one may perhaps see his father, State Councilor of the Government of Simbirsk, hereditary nobleman. In his ways of thought one certainly sees his brother, executed as a political offender by the Czar's police when Lenin was seventeen.

Robins could never visit Lenin in the Czar's High Court Building without thinking of that execution and of the sanction given to it - and to all such executions - by the Russian State Church. Back of the gallows, generation after generation, in every part of Russia, stood the priests, with their vessels of gold and their vestments of lovely weavings, and with their icons, preaching obedience to autocracy and giving the word of God to back the word of the Czar, and blessing the hangman.

"That is simply not so," said Robins. "Our national government and our local governments are elected by the people, and most of the elections are honest and fair, and the men elected are the true choices of the voters. You cannot call the American government a bought government."

"Oh, Colonel Robins," said Lenin, "you do not understand. It is my fault. I ought not to have said corrupt. I do not mean that your government is corrupt in money. I mean that it is corrupt and decayed in thought. It is living in the political thinking of a bygone political age. It is living in the age of Thomas Jefferson. It is not living in the present economic age. Therefore it is lacking in intellectual integrity. How shall I make it clear to you? Well, consider this:

"Consider your states of New York and Pennsylvania. New York is the center of your banking system. Pennsylvania is the center of your steel industry. Those are two of your most important things---banking and steel. They are the base of your life. They make you what you are. Now if you really believe in your banking system, and respect it, why don't you send Mr. Morgan to your United States Senate? And if you really believe in your steel industry, in its present organization, why don't you send Mr. Schwab to the Senate? Why do you send men who know less about banking and less about steel and who protect the bankers and the steel manufacturers and pretend to be independent of them? It is inefficient. It is insincere. It refuses to admit the fact that the real control is no longer political. That is why I say that your system is lacking in integrity. That is why our system is superior. That is why it will destroy yours."

"Frankly, Mr. Commissioner," said Robins, "I don't believe it will."

"I'll tell you," said Lenin. "Our system will destroy yours because it will consist of a social control which recognizes the basic fact of modern life. It recognizes the fact that real power to-day is economic and that the social control of to-day must therefore be economic also. So what do we do? Who will be our representatives in our national legislature, in our national Soviet, from the district of Baku, for instance?

"This system is stronger than yours because it admits reality. It seeks out the sources of daily human work-value and, out of those sources, directly, it creates the social control of the state. Our government will be an economic social control for an economic age. It will triumph because it speaks the spirit, and releases and uses the spirit, of the age that now is.

"Therefore, Colonel Robins, we look with confidence at the future. You may destroy us in Russia. You may destroy the Russian revolution in Russia. You may overthrow me. It will make no difference. A hundred years ago the monarchies of Britain, Prussia, Austria, Russia, overthrew the government of revolutionary France. They restored a monarch, who was called a legitimate monarch, to power in Paris. But they could not stop, and they did not stop, the middle-class political revolution, the revolution of middle class democracy, which had been started at Paris by the men of the French Revolution of 1789. They could not save feudalism.

"Colonel Robins, you do not believe it. I have to wait for events to convince you. You may see foreign bayonets parading across Russia.

This utter assumption of the inevitability of things was naturally appalling to Robins. It was a denial of the essence of Americanism. The essence of Americanism is an utter assumption of human free will---of human free will determining human fate by its own visions of its own moral preferences. It follows in complete Americanism that we have to consult the conscience of every citizen, irrespective of economic or other status, and that we have to proceed in the light of the accumulated consciences of the nation, as revealed roughly in majorities.

Lenin's philosophy could not convince any American like Robins. Robins came back from Russia more anti-Socialist than when he went. But he also came back knowing that Lenin's philosophy is indeed a philosophy and that it cannot be countered by pretending that it is nothing but blood and wind. It challenges Americanism with a genuine challenge. It does not merely reject the basis of Americanism. It brings forward a strongly competitive basis of its own.

Such was Lenin in talk.