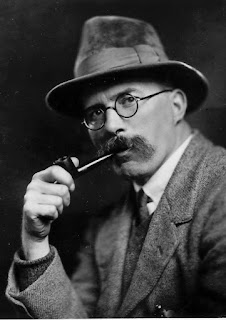 Arthur Ransome was never a Marxist Leninist - as you can quite clearly see from his writings -but he did show a degree of sympathy for the Russian Revolution - how deeply sympathetic he was is questionable in view of releases  from British and Russian archives.

Files released in 2005 by MI5 at the National Archives in Kew revealed the extent of confusion surrounding Ransome's true loyalties.

In 1918, when the writer left Russia for Sweden with Evgenia formerly Trotsky's Secretary and now his wife  the MI6 officer in Stockholm reported to the Foreign Office:

"It certainly ought to be understood how completely he is in the hands of the Bolsheviks.

"I know that he has informed two Russians that I am an agent of the British government and said that he had this information from authoritative sources, both British and Bolshevik. He seems to be working pretty definitely against us."

But in a later report from Stockholm, it was stated that:

"Ransome seems to have been badly handled. He is quite loyal and willing to help by giving information.

"The appearance of working against us is due to his friendship with the Bolshevik leaders, not by any means any sympathy with the regime, which the Terror made him detest."

In 1919, he was arrested as he alighted the train at Kings Cross and taken to be cross-examined by Special Branch. When asked what his politics were, he replied: "Fishing."

Ransome later settled in the Lake District with Evgenia in 1924, where he wrote the Swallows and Amazons series of books and where he lived until his death in 1967.

In 1927, 10 years before he was removed from MI5's "blacklist", the security service noted:

"It is difficult to gauge Ransome's real sentiments, but it seems clear from our file that he did some good work for us, but at the same time there has always been the suspicion that he was leaning towards Bolshevism."

By 1937 it seems he was cleared by British intelligence of Communist sympathies.

Arthur Ransome knew personally many of those on Trial in Moscow in 1936-1938 and in particular he was a close personal friend of Karl Radek - the fact that Arthur Ransome was also working for M16 since 1919 and was a friend of Radek raises many questions - if not answers.

We take the view that he was an Englishman with Russian sympathies who was not hostile to the Bolsheviks  and was never a revolutionary communist who played both British Intelligence and Soviet Intelligence and survived to live in Lake District until 1967.

But where did his final loyalties lay.

“It’s good to have confirmation that Ransome was working for British intelligence because there has been widespread speculation about where his loyalties lay. Now we know for certain that he was not a traitor of any kind.”