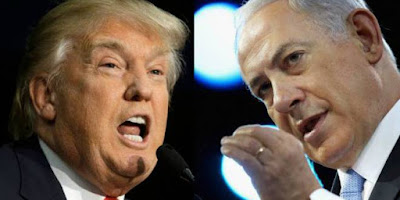 
Democracy and Class Struggle never tired of telling people of the danger of the Trump/Netanyahu imminent danger to Iran - before we knew this story below about Netanyahu - 2017 is going to be a hell of a year.


In a statement that was not to be made public until his death, the former Israeli President told Jerusalem Post he stopped PM Benjamin Netanyahu from a “catastrophic” military strike against Iran, at the time the world leaders were engaged in nuclear deal talks.

Israel has been the most ardent critic of Iran’s nuclear program for decades, viewing Tehran’s progress in this sphere as a direct threat to Israel and regional security. For years the country has resisted the P5+1 negotiations on Iran’s nuclear future.

Benjamin Netanyahu’s cartoon of a nuclear bomb which he presented to the UN General Assembly in September 2012 certainly grabbed the world’s attention. Having incessantly talked about “red lines” for Iran's nuclear development, four years ago he literally drew one across the bomb to illustrate the point at which the international community should take decisive action. Netanyahu set his literal red line at the 90 percent threshold of uranium enrichment.

Up until P5+1 (China, France, Russia, the United Kingdom, the United States, plus Germany) announced the agreement with Iran in July 2015, to limit the country’s nuclear development in exchange for sanction relief, Israel was threatening to take unilateral action against Tehran.

A day after the funeral of Shimon Peres, Jerusalem Post published the former president’s revelation which was shared with the publication two years ago, revealing that he was solemnly responsible for stopping Netanyahu’s plan. With this revelation, it seems that plans to attack Iran at the time were not just empty threats.

The conversation between Peres and Jerusalem Post Managing Editor David Brinn took place at the Peres Center for Peace in Jaffa on August 24, 2014. During the exchange, Brinn asked Peres what he would consider the greatest achievement of his presidency (2007-2014), to which the elderly president responded by saying that he had personally intervened to stop Netanyahu from attacking Iran’s nuclear sites.

Brinn, in a JP article, published some notes from that conversation, which quoted Peres as saying:“I stopped Netanyahu from attacking Iran.”

“I don’t want to go into details, but I can tell you that he was ready to launch an attack and I stopped him. I told him the consequences would be catastrophic,” Peres was quoted as saying.

When asked by the publication if they have his permission to report on the claim, Peres replied: “When I’m dead.”

After suffering a stroke, Peres died on September 28, 2016, near Tel Aviv, allowing his years-long claim to be made public.

While details of the possible strike were not shared by the former president, the attack could potentially have followed the blueprint of Operation Opera, which was a surprise Israeli air strike on June 7 1981, that destroyed an Iraqi nuclear reactor under construction 17 kilometers southeast of Baghdad.