INDIA: HARSH THAKOR SAYS RESIST THE WRATH OF THE FASCIST REPRESSION OF C.P.I.(MARXIST) ON MAOIST COMRADES AND DEMOCRATS IN DISGUISE OF ENCOUNTER. 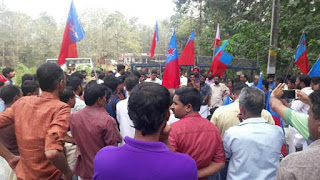 RESIST THE WRATH OF FASCIST REPRESSION  OF C.P.I.(M.) ON MAOIST COMRADES AND DEMOCRATS IN DISGUISE OF ENCOUNTER.

IN KERALA.C.P.M.GOVT IN KERALA HAS ACTED LIKE A MASTER IN CAMOUFLAGING THE INCIDENT AS AN ENCOUNTER.

A BRILLIANT ILLUSTRATION OF HOW IT PRETENDS TO BE A BOURGEOIS DEMOCRACY AND SIMULTANEOUSLY BRUTALLY ATTACKS DEMOCRATIC ACTIVISTS AND MOVEMENTS.

SALUTE PROTESTS ALL OVER KERALA WHICH ARE SOWING SEEDS FOR RESURRECTING THE LIGHT OF THE TORCH FOR RESISTANCE AGAINST FASCISM.

A protracted state-wide protest has been launched all over Kerala giving birth to a resurrection of the movement against fascism.

Significant that Kerala is hit by the tentacles of R.S.S.fascism more than any state in India bar Uttar Pradesh or Gujarat and that too in one led by the Communist Party of India (Marxist).

It gives echoes of the brutal repression on Naxalite forces by the C.P.I-M govt.in West Bengal.

In fact it is C.P.I.leaders who are condemning the incident and not any leader of C.P.M.

Although the democratic movement is weak intellectuals and youth have bravely come out against the brutal act and a birth is being given to a new resistance movement against state repression.

One of the most significant developments in Kerala was the resurgence of the Maoist movement however weak.

Significantly even C.P.I.(M.L.) Red Star led by K.N.Ramchandran has condemned the incident.

All democrats world-wide must give solidarity without fail for the guilty police officers to be punished and democrats like Comrads Ravunni to be released.

The unprecedented protests that erupted following the fake encounter killings of two Maoist leaders Kuppu Devaraj and Ajitha on 24th November in the South Indian state of Kerala seems to have stunned the state.

As the news broke out of the killings in the Nilambur forests in the Western Ghats human rights organizations including Janakeeya Manushyavakasha Prasthanam expressed doubts over the state version. 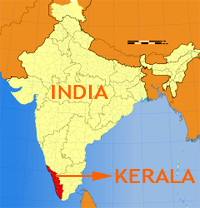 Following this the social media too were abuzz with protests and demand for a just enquiry. The initial response from the part of Director General of Police Loknath Behra itself that he was too happy over the killings of the Maoists provoked people.

The incident of killing the revolutionaries created ripples in the ruling Left Democratic Front too.

The second largest constituent of the front CPI itself came strongly against the government version.

He also said that the people in Kerala voted the Left Democratic Front into power not to emulate the Modi government.

Other CPI leaders and Congress party leader V. M Sudheeran too joined him

Different organizations protesting the killings have now formed an Anti Fake Encounter Killings Front to take up the issues of fake encounters.

On 9th this month a convention is being planned in Calicut and the future course of actions will be chalked out in this convention.
Posted by nickglais on 12/02/2016 03:22:00 AM