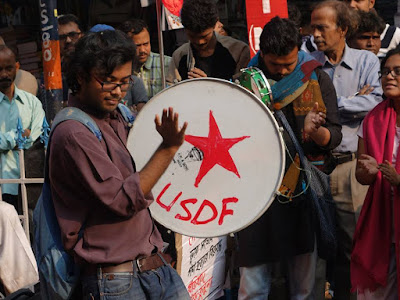 I WAS PRESENT AT THE WHOLE GATHERING AND APPLAUDED THIS JOINT EFFORT OF COMMUNIST REVOLUTIONARY FORCES AND DEMOCRATIC ORGANIZATIONS REPRESENTING ALL TRENDS WITHIN THE REVOLUTIONARY CAMP,CONDEMNING THE FASCIST KILLING OF MAOIST COMRADES AND ADIVASIS IN MALKANGIRI,

MUSLIMS IN BHOPAL AND MAOISTS IN KERALA.ALTHOUGH CONSTITUTING ABOUT 500 PEOPLE SUCH AN EFFORT SOWS THE SEEDS FOR A MAJOR TORRENT TO OCCUR.

PRIVILEGED TO SEE SUCH FIERCE DETERMINATION THROUGHOUT THE REVOLUTIONARY CAMP PRESENT TODAY AND THE BURNING ENTHUSIASM OF THE YOUTH AT THE END SHOUTING SLOGANS CONDEMNING THE MALKANGIRI MASSACRE..THE END DID FITTING JUSTICE TO THE SPIRIT OF THE PROGRAMME. 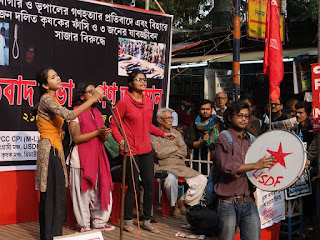 It was presided by Purnendu Mukherjee CC member of C.P.I.(Maoist) who was released on bail on health grounds  and Gaur Chakravorty.

What was heartening was that all sections of the Communist revolutionary camp participated and some pr-worker organizations.

In fact it was the youth who gave the programme it's life.All speakers related the fascist nature of the killings and how this state is becoming more and more repressive day by day.

Irrespective of differences all agreed that one has to be sympathetic to the Maoist brethren and the Muslim victims.

Such a programme all though quantitatively small in the qualitative sense lays the roots for building an anti-fascist movement.

I was deeply impressed with the enthusiasm of all the participants be it youth tribals, students or workers.

It proved the potential of a democratic movement emerging.