India: The verdict on Ayodhya: a historian's perspective by Romila Thapar 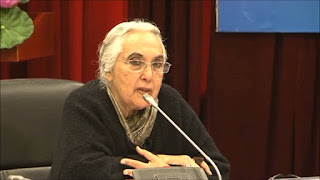 Democracy and Class Struggle remember the destruction of the Babri Masjid on 6th December 1992.

We publish this article by historian Romila Thapar on the land verdict decision in 2010 concerning the Babri Masjid and its implications.


It has annulled respect for history and seeks to replace it with religious faith.

The verdict is a political judgment and reflects a decision which could as well have been taken by the state years ago. Its focus is on the possession of land and the building a new temple to replace the destroyed mosque. The problem was entangled in contemporary politics involving religious identities but also claimed to be based on historical evidence. This latter aspect has been invoked but subsequently set aside in the judgment.

The court has declared that a particular spot is where a divine or semi-divine person was born and where a new temple is to be built to commemorate the birth. This is in response to an appeal by Hindu faith and belief. Given the absence of evidence in support of the claim, such a verdict is not what one expects from a court of law. Hindus deeply revere Rama as a deity but can this support a legal decision on claims to a birth-place, possession of land and the deliberate destruction of a major historical monument to assist in acquiring the land?

The verdict claims that there was a temple of the 12th Century AD at the site which was destroyed to build the mosque — hence the legitimacy of building a new temple.

The excavations of the Archaeological Survey of India (ASI) and its readings have been fully accepted even though these have been strongly disputed by other archaeologists and historians. Since this is a matter of professional expertise on which there was a sharp difference of opinion the categorical acceptance of the one point of view, and that too in a simplistic manner, does little to build confidence in the verdict. One judge stated that he did not delve into the historical aspect since he was not a historian but went to say that history and archaeology were not absolutely essential to decide these suits! Yet what are at issue are the historicity of the claims and the historical structures of the past one millennium.

A mosque built almost 500 years ago and which was part of our cultural heritage was destroyed wilfully by a mob urged on by a political leadership. There is no mention in the summary of the verdict that this act of wanton destruction, and a crime against our heritage, should be condemned. The new temple will have its sanctum — the presumed birthplace of Rama — in the area of the debris of the mosque. Whereas the destruction of the supposed temple is condemned and becomes the justification for building a new temple, the destruction of the mosque is not, perhaps by placing it conveniently outside the purview of the case.

Has created a precedent

The verdict has created a precedent in the court of law that land can be claimed by declaring it to be the birthplace of a divine or semi-divine being worshipped by a group that defines itself as a community. There will now be many such janmasthans wherever appropriate property can be found or a required dispute manufactured. Since the deliberate destruction of historical monuments has not been condemned what is to stop people from continuing to destroy others? The legislation of 1993 against changing the status of places of worship has been, as we have seen in recent years, quite ineffective.

What happened in history, happened. It cannot be changed. But we can learn to understand what happened in its fuller context and strive to look at it on the basis of reliable evidence. We cannot change the past to justify the politics of the present. The verdict has annulled respect for history and seeks to replace history with religious faith. True reconciliation can only come when there is confidence that the law in this country bases itself not just on faith and belief, but on evidence.

( Romila Thapar is a distinguished historian of Early India.)