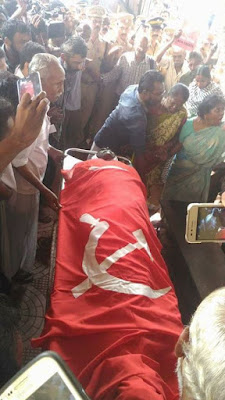 SALUTE THE BOLD RESISTANCE OF REVOLUTIONARY DEMOCRATIC FORCES STAGING THE FUNERAL OF COMRADE KUPPU DEVRAJ.AND DEFYING THE FASCIST ATTACK OF THE SAFFRON BRIGADE OF THE SANGH PARIVAR WITH WHICH THE C.P.M.L.D.F. GOVT. AND POLICE COLLUDED WITH.MAY HIS MARTYRDOM RESSURECT THE TORCH OF NAXALBARI IN KERALA AND SOW THE SEEDS FOR MANY NEW ROSES TO BLOOM.ORGANIZE REVOLUTIONARY DEMOCRATIC SECULAR RESISTANCE TO DESTROY THE FANGS OF THE HINDU SAFRON SNAKES UNLEASHING FASCIST TERROR IN KERALA..SALUTE COMMUNIST PARTY OF INDIA FOR BOLDLY DEMANDING JUDICIAL INQUIRY AND C.P.I.LEADER BINOY VISWAM FOR PAYING HOMAGE TO MAOIST LEADER.

The fascist nature of the ruling C.P.M.was exposed and there was no better illustration of how ruling class parties co-operate and bless Hindu communal fascism

It is also significant how the Kerala court rejected the re-post mortem plea which is testimony of how the state machinery morally works and also how much the police complied with the Hindutva fascist and L.D.F.govt,forces forcing the body to be cremated as quickly as possible and at first preventing the homage ceremony from even taking place.

What was encouraging was the spontaneous support to comrade Devraj 's cause by the common people revealing the potential for a big protest movement emerging..Only because of the people's resilience and resistance did the police allow the body to be laid down for paying homage. We must also salute the Communist party of India and it's leader for paying a tribute to the slain Maoist leader and demanding a judicial inquiry.

Amidst slogans shouted from a thousand mouths, the dead body of CPI Maoist central committee member Kuppu Devaraj, killed few days back in a fake encounter in Nilambur in Kerala, was cremated today evening in Calicut.

The unprecedented show of solidarity by the people turned out to be an embarrassment for the CPIM led LDF government.

And the day witnessed high drama as CPI M led government joined hands with the Sangh Parivar forces to keep the body away from people.

As the Kerala High Court rejected the repostmortem plea yesterday, Devaraj's family members including his mother along with human rights activists and other activists came to receive the body from Calicut Medical College.

Their plan was to receive the body and keep it a few hours in Muthalakulam Ground in the city for the people to pay homage before the burial.

However Yuvamorcha and other Sangh Parivar outfits thronged near the ground.

Then the police suggested that the body could be released, but it should be cremated at the earliest.

Veteran revolutionary Gro Vasu then informed the police that the body will be taken to his place for the people to pay last respects.

Then the saffron outfits thronged at Comrade Vasu's place too.

The police then directed that the body will be released only if it's cremated without putting it for the public to pay homage.

Though it was opposed initially , as the police was not ready to budge, the activists was forced to oblige.

Thus the CPM's police and Sangh Parivar forged an alliance to insult even the dead bodies of the revolutionaries.

However, the the dead body was put outside the Medical College and people paid homage there.

The atmosphere was reverberating with revolutionary slogans.

To add to the embarrassment of CPM, CPI state leader Binoy Viswam came to the Medical College and paid homage to Comrade Kuppu Devaraj

Later the body was taken to the Medical College. On the way, saffron outfits tried to obstruct the vehicles of human rights activists.

Later the body was cremated in the government crematorium amidst slogan shouting.

The dead body of Comrade Ajitha is yet to be released.

Human right activists and Maoist sympathisers bid adieu to slain leader of CPI (Maoist) Kuppu Devaraj in Kozhikode district of Kerala, resisting opposition from the Kerala police and BJP workers. Police denied permission to the human rights activists to lay the body at a public place in heart of the city. BJP workers also came out against the move.

Later the activists numbering more than 100 gathered in front of the mortuary and draped the Maoist leader in a red flag and raised slogans praising their martyrdom and Naxalbari movement.

Earlier in the day, BJP and Yuva Morcha workers had warned that they would disrupt any attempt to organised public view of the body, after which the police had denied permission for it.

After mounting pressure from the rights activists, police was forced to agree on the demand to lay the body before the mortuary to enable sympathisers to pay homage to the Maoist leader.

Kuppu Devaraj and Ajitha, two leaders of the outlawed CPI (Maoist) was killed by the Kerala police in Malappuram District of Kerala on 24 November. As the right activists and kin of the deceased moved to court, it was ordered to keep the bodies in the mortuary.

Meanwhile, the Kerala High Court on Friday restrained the authorities till 13 December from cremating Ajitha?s body, which is kept in the same mortuary.

The Nilambur killing has spawned a debate on the police policy of the LDF government. While the CPI (M) desisted from criticising the police, the second biggest partner in government CPI has lashed out at cops and demanded a judicial enquiry.

CPI leader Binoy Viswam reached the medical college mortuary and paid homage to the Maoist leader
Posted by nickglais on 12/10/2016 05:01:00 AM