A Kissinger Moment in US - Russian Relations 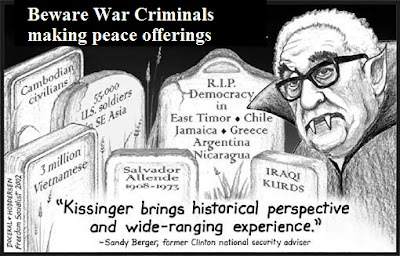 Just like Democracy and Class Struggle has been forecasting - a Kissinger moment in US Russia relations at expense of Iran and China - if the Kremlin falls for this war criminals trick Russian strategic alliance with China and Iran will be severely tested.

Former US Secretary of State Henry Kissinger has ‘deep expertise in Russia-US relations,’ Russian presidential spokesman Dmitry Peskov said commenting on a report that the 93-year-old may have a role in normalization of ties between Washington and Moscow.

“Kissinger remains one of the wisest politicians and experts who, among other things, has deep expertise in Russian affairs and Russia-US relations,” Peskov said on Tuesday.

“If his expertise and rich experience, accumulated over the decades, will be in demand in some way, we would definitely welcome it,” he added, speaking with journalists on Tuesday.

“But, of course, the relevance and applicability of [Kissinger’s] expertise is not our business, it has only to do with our American colleagues, we cannot interfere with it,” Peskov concluded.

Bild wrote on Monday that “According to research for western European intelligence services, based on information from the Trump team, the future president is looking to abolish the anti-Russian sanctions on Kissinger’s recommendation,” adding that US President-elect Donald Trump is seeking a rapprochement with the Kremlin.

The publication adds that Kissinger, who was secretary of state and national security advisor during the Nixon administration, has “clear ideas” about future relations of the two nuclear superpowers.

“He believes that a rapprochement with Russia is the right thing to do that will help offset the increasingly militant China. A balance between America and Russia will strengthen global stability,” the authors of the article say.

Earlier this month, Kissinger described the Russian leader as a “character out of Dostoyevsky,” saying, in an interview with CBS’s Face the Nation, that Putin is “a man with a great sense of connection, an inward connection, to Russian history as he sees it.”

When asked about the US president-elect, Kissinger said he sees the election of Trump as an opportunity to reshape US foreign policy. Trump actually “has the possibility of going down in history as a very considerable president,” he noted.