INDIA: HARSH THAKOR SAYS LET US ALL DIP OUR BLOOD IN MEMORY OF COMRADE GURDEV KAUR 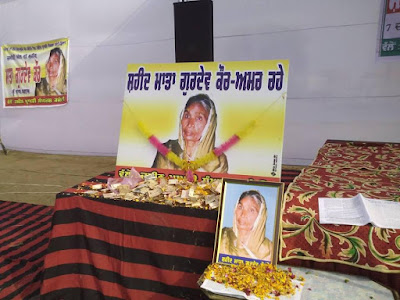 LET US ALL DIP OUR BLOOD IN MEMORY OF COMRADE GURDEV KAUR, VALIANT COMRADE WHOSE STRUGGLE WAS SYMBOLIC NOT ONLY OF  THE LIBERATION OF DALIT WOMEN AND  DALIT LANDLESS LABOURERS BUT THE OPPRESSED AND EXPLOITED SECTIONS AS  A WHOLE .

HER NAME WILL BE PERMAENTLY ENSHRINED AMONGST THOSE WHO LAID THEIR LIVES DOWN FOR THE OPRESSED .

Today a homage memorial  meeting or Shaheedi Samagam comprising 2500 people was held in Jaloor vilage in the home of slain comrdae Gurdev Kaur.

It was staged under the banner of the Jaloor Jabbar Virodhi action commitee.

The venue literally looked like being lit with red lamps with the torch of resistance shimmering.

Over the last  month a heroic campaign has been launched by the Zameen Prapti Sangharsh commitee to  arrest the assasins responsible for death of Gurdev kaur and release democratic activists.

The ZPSC has spearheaded a movement for the dalit community to receive 1/3rd share of panchayat land promised to them by govt which faced the wrath of criminal landlord elements backed by the Akali dal govt.

It has been one of the most unique experiments for dalits to re-capture land in the history of Punjab and thus faced the brunt of severe police repression.

The efforts of youth comrades of Naujwan Bharat Sabha must be complemented and later of the Jaloor Jabbar Virodhi action Commitee.

It has sowed the seeds for a major ressurection of land struggle for dalit landless labourers.2 of the 4 criminals responsible for death of Gurdev Kaur have been brought to the book but still 2 namely Gurdeep Babban and Nevsuj have to be arrested.

Today's meeting testified the resilience of the dalit landless labour commitee in fighting for justice and hope to win their demands. 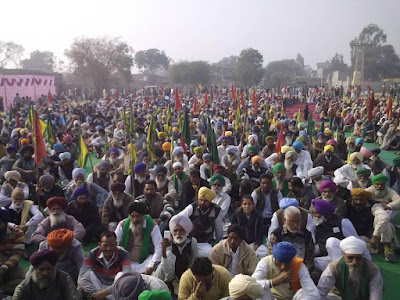