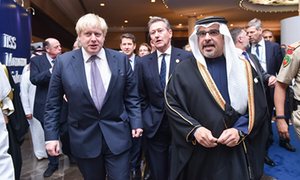 British Foreign Secretary Boris Johnson has recently raised controversy by saying that the UK is back in the Persian Gulf region and will remain committed to the security of its Arab allies for a foreseeable future.

Meanwhile, Johnson has criticized Saudi Arabia for its proxy war in the Middle East and its military aggression against Yemen. However, Prime Minister Theresa May’s spokeswoman has dismissed Johnson’s statements as his own personal views.

Press TV has interviewed an author to discuss Britain’s intentions in the region. Kaveh Afrasiabi, an author and political scientist from Boston, believes that the British government is trying to reinvigorate its imperial system in the Middle East by resorting to arms sales and a divide and rule policy.

UK Prime Minister Theresa May is pursuing the “British new imperial policy in the Middle East and the Persian Gulf in particular acting as a ... saleswoman of arms for the British arms industry.”

He noted that Britain is resorting to the divide and rule policy through the assistance of regional authoritarian regimes like the Al Khalifah rulers in Bahrain, adding that “the British are selling millions of dollars [worth] of tear gas, water canisters, et cetera, to the Bahraini government [to be used] against  peaceful protesters.”

The British government “has been selling billions of dollars [worth] of arms to nepotistic despots in the Persian Gulf region without an iota of concern about human rights,” he added.

Afrasiabi further said, “The British Foreign Office said that the Saudi bombings in Yemen are not a violation of humanitarian international law, which flies in the face of all the reports by the UN and human rights organizations.”

Pointing out to protests, even by the British establishment’s policymakers, against London’s policy toward regional supporters of terrorism, he noted that Britain’s “chief diplomat, Boris Johnson, just very recently bluntly said that the Saudis are ‘puppeteering’ extremist Wahhabists throughout the region and his statement was disowned by his own government.”

The British government is advocating regimes which are “funneling arms and finance to these extremist terrorists” that are “wreaking havoc and even undermining the security of Europe itself,” Afrasiabi stated.

Elsewhere, he referred to the anti-Iran policy of British authorities, saying that “they use Iranophobia as a very cheap excuse in order to provide the rationalization” for weapons sales to the region.

Britain is one of the main arms providers of the Persian Gulf Arab states and it plans to invest more than $3.7 billion in the region over the next decade.