USA: Trump’s top adviser, Kellyanne Conway, on Friday identified the four candidates on the president-elect’s list for secretary of state. 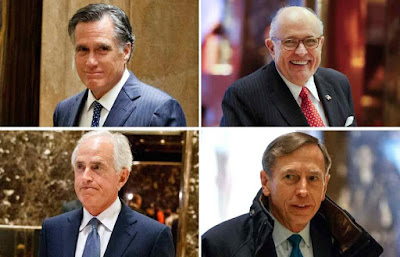 Democracy and Class Struggle has been watching the apprenctice style selection process for US Secretary of State - Corker seems to have some sympathy for the Iran Nuclear Deal while the other three are opposed.Given the existing security and military people around Trump even if Corker was made secretary of state he would be outnumbered on Iran and we do not rate his chances for the job.


Former New York City mayor Rudy Giuliani and former US ambassador to the UN John Bolton are not qualified to be secretary of state in President-elect Donald Trump’s incoming administration, a former US Senate candidate says.

“Joe Scarborough [co-host of Morning Joe on MSNBC] is absolutely correct; Giuliani does not have the qualifications to be secretary of state,” said Mark Dankof, who is also a broadcaster and pastor in San Antonio, Texas.

Giuliani lobbied for the removal of the notorious anti-Iran terrorist group known as Mujahedin-e Khalq Organization (MKO) from the US list of terrorist groups because of his close links to the Israeli lobby, Dankof told Press TV on Tuesday.

Bolton “would be even worse than Giuliani; he has even closer links to the Israeli lobby if that’s possible and he is a radical Zionist and a radical interventionist and supports the worse elements of American foreign policy,” he added.

Scarborough, the MSNBC host and former GOP congressman from Florida, said in a tweet that Giuliani is "neither qualified nor capable of effectively holding the position." He further wrote Giuliani is “dreadfully unprepared to be America's Sec State.”

"Selecting Rudy Giuliani as Sec State would overshadow any selections Donald Trump has made. After this week, that is especially true,” he said in another tweet in a thinly veiled reference to Trump’s recent controversial picks of retired Marine Gen. James Mattis, known as “Mad Dog”, for secretary of defense, and retired Lt. Gen. Michael Flynn for national security adviser.

Trump’s top adviser, Kellyanne Conway, on Friday identified the four candidates on the president-elect’s list for secretary of state.

A number of Trump’s top nominees for sensitive national security posts have accepted money from the MKO and lobbied for the group’s removal from the US list of terrorist groups.