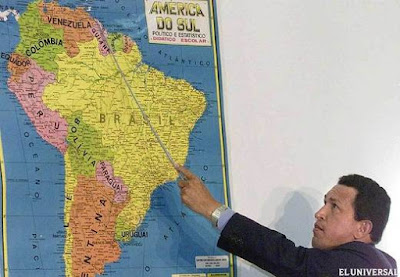 The Constitutional President of the Bolivarian Republic of Venezuela, Nicolas Maduro, does not have to prove the demonstrable: the Essequibo State is part of the historical geography of the entire territory of the historical Venezuela. Nothing to discuss, history proves it.

But it is a reality that is questioned that less expresses the history and the historical processes more when we are involved in any situations that really represents the capitalist historical socio-economic system of the natural evolution of "being created" as "being social" in shares and historical realities in historical spaces from which we draw the "historic speech".

That is, in our development topic, which is based on  specifically the development of the capitalist system and, specifically, post-Industrial Revolution, that is, at the same historical moment when capitalism Manchester and Liverpool  evolves into imperialism overseas, the British Empire decided to enter market competition with the Dutch and French merchants in the distant lands of India  defeating both armies in establishing a presence in an unusual way to typical European expansion in Asia.

That British Empire made India a colony rather than a Vice royalty with the whole structure of a dependent-state - British both legally and militarily and religious,  but fundamentally ideologically-educational.

That British presence in India was confronted with the objective requirements imposed on it by capitalist development itself both in India and mainly in the Europe of the crowned heads.

That expansion would lead to a symbiosis of business and military to sail the seas of southern Asia to find commercial refuge in southern China.

That fact, in our view, would be the catalyst of the capitalist imperialist system in its early phase,not only in business, military and religious force but by the very competition intra-empires of America when the US took its first steps expansionist post Monroe Doctrine in that historic Chinese nation, the justification to  develop an international legal framework that would become obligatory reference to relations between nations.

A glance of the text published in 1921 by the Carnegie Endowment for International Peace entitled "Treaties and Agreements With and Concerning China, 1894-1919", teaches us "the justification of the unjustifiable".

The expansion process of world capitalism in its imperialists early stages.

Agreements on drug trafficking, legalizing, transfer of national territories (read:Hong Kong Island), transfer of national territorial spaces in southern China in the form of "lease" for a period of 99 years (read: Kowloon) China economic consequence of the defeat of the "Boxer Rebellion" opening ports in strategic coastal cities in China (eg Shanghai, Tianjin) sanctions, obligation to provide the customs administration of acquired ports not only to mention but also"factual facts" but that each of these "factual facts" meant to sign a legal text that was and should be respected not only by the signatories but it was considered that they were forced respect for those countries that had not participated in your signature.

The development that  would be  imposed on the international scene must be respected and the imperial powers had all legal, political and international military rights, not only to impose the respect of agreed and signed sanctions but to impose by military means such as The "Block of La Guaira" perfect image in the "Block the port of Tianjin" in 1900, these international obligations, ie, walking to the "world government." "Since then" the Western powers and not so Western  have supported their arguments in that legal framework contained in the mentioned text proposed for its information and subsequent purposes.

In that historical referent context, it allows us, again to be referent to consenquential cases to the imposition of judicial  texts in the course of the nineteenth and twentieth century.

Let's go to some examples. the  "Russian-Japanese War",  the "Sino-Japanese", war, the delivering the  Taiwan island  to Japan as "war booty" and the already mentioned "block of  La Guaira", the sanctions and costs to the defeated Germany after the  World War I in Versailles and we must expose the logical consequences that would develop in the 30s of the fateful  XX century.

We must not fail in the pipeline three historical facts in our Caribbean region: Punta del Este and the expulsion of Cuba from within the Organization of American States, OAS, the "Missile Crisis" and the "Block of Cuba" as a logical development of US imperialism.

That is, both the American and British imperialists have shown that "they are  alive and well " as we know in the entente on the developments of the "Monroe Doctrine" in Las Malvinas, and in the geography of British Guiana.

As we have expressed and exposed above the "State of Essequibo" it is and is part of the Venezuelan State and this is not in any discussion.

That is, in our opinion, one does not discuss what is ours  but, as we have exposed, the realities are objectives and the "Venezuelan State" is obliged to expose the historical realities of the Venezuelan territoriality of  the Essequibo seen that, as we have also tried to show above, empires in its current phase of re engineering of both imperialists try to justify and be justified by international law which in this case is adverse to the Essequibo, in their current re-engineering of capitalism .

They take their arguments of "the deepening of sanctions under the Decree Obama" applied economic sanctions that go beyond the same contents of these sanctions because they are directly related to the violation of human rights and freedom of the economy and free movement of people as in the case of Russia.

Dr. Samuel Moncada expressed in the program moderated by José Vicente Rangel under the name of "José Vicente Today" (Televen, July, Sunday 26, 2015) that the Venezuelan government should go beyond the regional american bodies and obviously, of bilateral relations in the American scene implying that it should go beyond our american shores.

Such consideration of the historian and Ambassador Moncada is consistent and direct in relationship not only with the historical experiences in "other areas out of America" but that "Aggressive diplomacy" should be sustained in base of this  imperialist legal framework that is permanently on all negotiating tables and, consequently, in any earthly court.

That is, we can support our argument besides all historical documents and more recent as well as the theological arguments of the texts of St. Augustine and St. Thomas Aquinas, solid argument not only of conceptual meaning of the word "peace" in its application as "state policy".

That all this, in the context of the significance of the historical logic itself of the capitalist system, mainly in these historic moments of profound re-engineering of capitalist current system in structural crisis that has forced the group formed by the USA and Britain, combining a single aggressive policy throughout the Caribbean and throughout the Americas to the  south of the Rio Grande and the southern peninsula of Florida: Mexico, Guatemala, El Salvador, Venezuela, Ecuador, Bolivia, Argentina, Brazil, as references to the expansion of imperialists policy, because the American continent has a geographic qualities as part of the global geo strategy that allows any power that controls our American continent, control the world.

We are not exaggerating and put as an example the US and Canada. In both countries the only wars they  have faced were internal wars and / or between one and the other country in times of decolonization "13 Colonies."

Another example would be the "Cuban Missile Crisis" in Cuba, the  historical moments of the Venezuelan urban guerrillas in support of those tragic and dangerous moments that the Cuban brother people lived; that crisis showed that when the United States of America proposes, it applies the "Monroe Doctrine" regardless of the crisis in chaos that can generate its military actions. There are other examples: Grenada, Panama, Colombia, Chile, Argentina, Brazil, Venezuela.

In that context,  as shown,  we have not touched the "military issue" in conscience , but as my commander in chief Hugo Rafael Chavez  Frias expressed ..