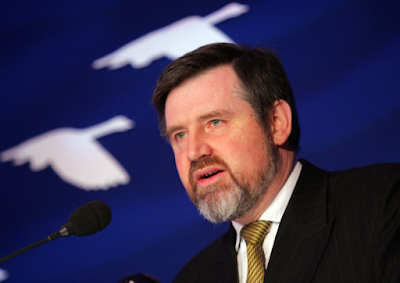 Status: British Labour Party politician and Member of Parliament for Brent North since 1997.

Affiliation with Modi: In 2013, Gardiner, on behalf of ‘Labour Friends of India’, invited PM Modi to address the House of Commons on the subject of ‘The Future of Modern India’.

Gardiner has been vocal about his support for Modi, despite his role in the 2002 Gujarat genocide, stating that “he is obviously a key player in Indian politics, and as such he is somebody British politicians need to hear from” and that the invitation to Modi “is a culmination of several years of engagement between senior representatives of the Labour Party and Modi”.

In 2001, Gardiner, visited Gujarat and describing himself as the Chair of Labour Friends of India(LFI) presented then Chief Minister Narendra Modi with a cheque for one million pounds.

Till then  few people in India or Britain, had heard of LFI.

The money raised by  Sewa International, a charity based in Britain, ostensibly for the victims of the Gujarat earthquake of 2001 and the Orissa cyclone of 1999 was to find its way to the Rashtriya Swayamsevak Sangh (RSS) who were exposed as perpetrators of the genocidal attacks on Muslims in Gujarat.

Gardiner has visited Israel more than once on behalf of Labour Friends of Israel, of which he was Vice Chair.

He sacked his campaigns manager for demonstrating support for the Palestinians massacred by Israel during the Gaza slaughter.