France : OCML Voie Proletarienne Their War, our dead as elsewhere ! It is their National Unity our Popular Unity 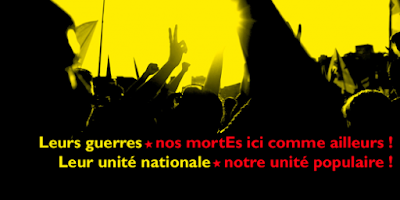 After the attacks in Beirut and against the Kurds in Turkey, now over 100 dead in Paris in the worst death toll in the capital since the 17 October 1961 when the French police massacred Algerians during a demonstration for independence. The ISIL terrorists struck out at random at a football match, on café terraces, during a concert, etc.

These appalling crimes breed alarm, fear and panic. We are in a state of shock as some of us mourn colleagues and friends, wounded or dead. The whole population of Paris and its surrounding area were the target. These were Fascist attacks against the people, driven by a deadly ideology fuelled by domination and terror.

The condemnation of this mindless bloodbath is unanimous, with everyone determined to stand shoulder to shoulder against ISIL. But make no mistake : the unity which has arisen against these criminals does not mean falling into step behind Hollande or other reactionaries. It is a spontaneous outpouring of positive, grassroots democratic and anti-fascist human solidarity. It is a legitimate aspiration which needs to be nurtured into full-blown popular resistance, avoiding the trap of the bourgeoisie waving the flag of "national unity".


"It’s war" we hear all around us. And it’s true. But this is not our war : we are the victims, not forgetting the peoples in the Middle East and Africa who are on the front line.

The ISIL terrorists are the product of the military interventions which have raged for decades spearheaded by Russia, the USA, France and other European countries in Afghanistan, Iraq, Africa, Syria and elsewhere. It is the governments who are most to blame for this carnage !

We condemn the French and European alliances with Turkey and Saudi Arabia who provide ISIL with cover. We demand a halt to all interventions, the withdrawal of French troops and the closure of the military bases !


The French government has declared a state of emergency, closing the borders and announcing a new set of repressive laws and other measures, with Sarkozy vying to outdo Le Pen… In the wake of the massacres at Charlie Hebdo and the Kosher supermarket and the shootings by Mohammed Merah, even after bringing into force dozens of similar laws they have been unable to prevent this new massacre. But one thing is sure : the new laws will be used against migrants, against our undocumented comrades and co-workers, against trade-unionists, people active in associations, environmentalists, etc.


The government continues to wage its war while we mourn our dead, here and around the world. Fear hangs clinging all around us. But we must not sit back and leave our security in the hands of those who exploit and rule us. They would have us believe that we are powerless, but we are not. In the war against ISIL we support the progressive side, such as the Kurdish freedom fighters in Kobanî and elsewhere.

We must promote solidarity with all refugees in their flight from chaos. Solidarity and support must win out in our neighbourhoods, organising and turning our backs on those who would lead us into disaster and who seek to pit us against one another.


Everywhere we must bravely wage our own war : the class war, fighting for the rights of undocumented migrants, the workers employed by Air France and others against layoffs and exploitation, the fight for solidarity with migrants, the war of the whole of the proletariat against imperialist governments.]


Unconditional regularisation for all undocumented migrants and freedom of movement !


Progressive and revolutionary organisations must be struck of the list of terrorist groups !