India: Ludhiana against Communal Fascism an example for all of India to follow by Harsh Thakor

Today a protest of great political significance was staged in Ludhiana in Punjab.

Meticulous political preparation to educate workers was done in the the colonies of the workers.Union activists went door to door to campaign and explain the need for combating communalism.

It was a great success in arousing anti-communal passions and promoting spirit of secular resistance.

Such protests are rarely ever staged in India.Protest against communal fascism. 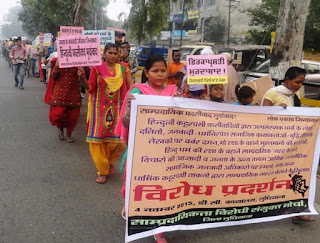 An example to workers all over India in the need for working class unity to combat communal fascism.

Secular people should salute such an effort.A pamphlet was distributed explaining the divide and rule policies of the ruling parties and how religious politics was used as an obstacle in struggling for burning issues of the day.The demonstrators stressed that only the working class can defeat the monster of communal fascism by sharpening the sword of their class struggles.

The posters raised slogans against atrocities on minorities in the name of cow slaughter, Love Jihad.

The speakers said that if Hindu fascist forces are dangerous, the other religious fundamentals forces too are enemy of the progress and justice to people.

The resistance against Hindutva fascist forces should be through broader unity. The speakers condemned the desecration of Guru Granth Sahib and demanded that culprits be exposed and should be punished

Through the filthy communalist game of emotional exploits BJP came to power in center. The promises of Modi and his allies, proved false.

First, they demand one year for Acche Din and now BJP is demanding 25 years. The harsh realities of life have greatly angered people against the government. So rulers have only one option but to divide and rule. 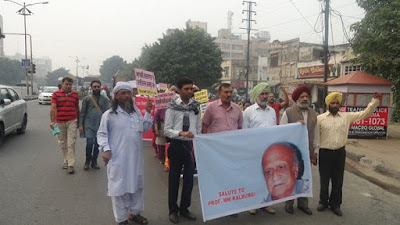 The speakers said that communal fundamental forces are saying Hindu religion is under threat but like love jihad all things are rumors, because rulers fear from the anger of the masses.

The elite class has a fear from 85 percent people who are suffering with unemployment, poverty, inflation.

The state has a horror from the unity of people, their rights, struggle, and right to speech. The government has fear that may be people can revolt against privatization, liberalism and land accusation.

The front in a joint statement gave a call of brotherhood and harmony and appealed people to understand the divide and rule policy of government, and fight against such policies.

The joint front also welcomed that decisions of writers, historians who returned back their Padam Shri and Sahiatk Academy awards.

They also made a call to other writers, artists, historians, intellectuals to fight against fascist tendencies of intolerance and repression of free thought.