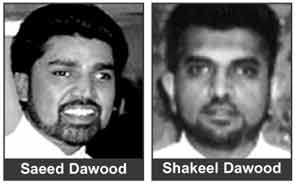 “The family has learned of the acquittal of six men charged with the murders of Saeed and Sakil Dawood, apparently on the basis that none of the accused were identified.

In February 2002, two family members, Sakil Dawood, Saeed Dawood and their childhood friend, Mohammed Aswat and the Indian driver, Yusuf Palagar, were killed in appalling circumstances. Another family member, Imran Dawood, was left for dead but miraculously survived though suffering serious and long-term injuries. Ironically the verdict has been announced exactly 13 years to the day when the violence began.

The killings took place in the midst of communal violence, in Gujarat in February and March 2002, instigated by the Sang Parivar against the Muslim community that saw thousands of people murdered, hundreds of women raped, scores of thousands of Muslim owned businesses looted and suffering arson and an estimated hundred thousand people fleeing their homes for safety. The carnage took place under the watch of Narendra Modi, the current Prime Minster of India.

Unfortunately and sadly the verdict does not come as a surprise. It is an established fact that the Gujarat police failed to investigate the murders properly and thoroughly. This negligence was especially noticeable in two key aspects of the investigation: the police’s unwillingness to identify, interview and support crucial witnesses and their apparent inability to collect forensic evidence.

How can a country continue to claim that it promotes rule of law when it can take 13 years to deliver a verdict in a case that should have been completed within 12 months, and, as importantly, fail to deliver justice for victims?

The tragedy, something that the family has to live with on daily basis, is that the mob responsible for killing their loved ones are still loose on the streets.