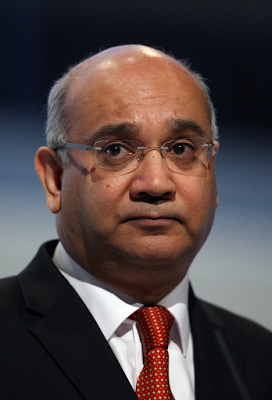 If fascism has been reincarnated in India with Prime Minister Narendra Modi as its standard bearer, on this side of the world  British MPs are playing the role of Chamberlain. The difference though is that instead of holding secret meetings with the Indian version of Hitler in India, they are openly welcoming a mass murderer to Britain.

The most prominent of these MPs are Barry Gardiner, Labour MP for Brent North and Keith Vaz, Labour MP for Leicester East. Both have significant numbers of Gujarati Hindu voters in their constituencies, many of whom have absorbed the anti-Muslim, anti-Dalit propaganda of the Hindu Right.

Instead of fulfilling their roles as responsible leaders and educating their voters, these MPs are simply (and contemptuously) regarding them as vote banks incapable of rational thought.

We have already written about Barry Gardiner, next in our Hall of Shame is Keith Vaz. Like Gardiner, Vaz is an opportunist par excellence. He also has a remarkable talent for reinventing himself .

While in 1989 he joined right-wing Muslim marchers opposing the publication of Salman Rushdie’s book The Satanic Verses, today he is able to welcome Narendra Modi, the Butcher of Gujarat, with open arms –  turning a blind eye on the on-going  murders, rapes and intimidation of Muslims, Christians and oppressed caste Hindus in India under Modi’s Hindu-fascist government.

Against a background where nearly a million people in the UK depend on food banks, while in India thousands of traumatised people (who have lost loved ones as a result of on-going Hindutva violence) are  still without homes or livelihoods,

He declared ‘I am so excited about this event I will donate my pay rise for November for this great function’. Two other Labour MPs, Virendra Sharma and Steve Pound, eager to follow in his footsteps also rushed to declare their support in the same way for the collossal waste of money involved in ‘welcoming’ Modi.

Vaz’s labour of sycophancy has been built over several years during which he has been ready to cosy up to every wealthy Hindutva supporter in the UK. Among them is C.B. Patel, the owner of Asian Voice and Gujarat Samachar publications, both of which have played a highly dubious role in creating divisions in the Asian community.

At the same time, as the Independent reported, Vaz  ‘has spent much of his 26 years in the corridors of power mired in near-scandals, actual scandals, watchdog scrutinies, leaks, accusations, investigations, complaints and a suspension’ … and ‘been christened “the Teflon MP” and “Keith Vazeline” for the way he seems to slide past trouble’.

These scandals include the Hinduja affair in 2001 when Vaz  made enquiries to the Home Office about the passport applications of the corporate bosses, the Hinduja brothers, who just happened to be clients of his wife Maria Fernandes’ firm, and  close friends of his family. In the wake of the scandal, Vaz admitted to helping them but denied any conflict of interest. He resigned from his post as Europe Minister on medical grounds.

Most recently, in summer this year,  Vaz, known by now as the ‘go to man’ for visas intervened on behalf of  the tycoon Lalit Modi, founder of the IPL Cricket League whose passport had been revoked by the Congress government following allegations of corporate corruption, money-laundering and tax evasion.

Vaz personally wrote to Sarah Rapson, the director- general of UK visas and immigration, in an effort to expedite Lalit Modi’s case. At the time, Vaz was Chairman of the powerful Commons Home Affairs Select Committee in which role he was required to scrutinise and hold to account the work of Rapson and her department.

The approach on behalf of a wealthy and influential individual who was not one of Vaz’s Leicester East constituents and moreover was implicated at the time in a number of criminal offences in India led to accusations of conflict of interest which, however, Vaz appears once again to have hushed up successfully.

The British government claims to exclude those who have been involved in acts of terrorism but it has had no qualms about giving visas, not only to Narendra Modi but also to others directly involved in Hindutva terror and Vaz has played a key role in making them feel welcome.

They have been allowed to enter freely and also to address meetings in Parliament.

One of them is, Sadhavi Rithambara  indicted by the Liberhan Commission  as one of the culprits and provocateurs in the demolition of 16th century Babri Mosque.

We do not have proof that Vaz abused his position and arranged the hate-priestess’s entry into Britain. What is clear, and shocking, however, is that during one of her visits he organised a meeting in her honour at the House of Commons.

Most recently, restless to outdo the other diehard Modi supporters and ignoring the concerns of his party leader, Jeremy Corbyn, and 40 other MPs who have signed an Early Day Motion about the increasing number of human rights violations in India,