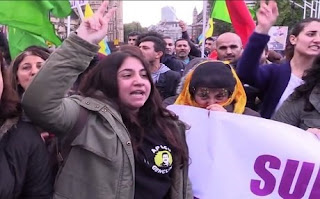 Democracy and Class Struggle says nothing exposes the hypocrisy of Cameron more this case is London of Kurdish girl Shilan Ozcelik.

The Kurds in Syria are connected via YPG/YPJ to Kurdish Workers Party but Cameron wants to work with Islamists in Syria who are going to have a meeting in Saudi Arabia to fight Syrian Government in his phoney anti ISIS fight while real fighters against ISIS get imprisoned in UK.

LONDON – Shilan Ozcelik, an 18-year-old British girl of Kurdish descent, has been convicted in Britain of trying to fight with the Kurdish People’s Protection Units (YPG/YPJ) against the Islamic State (ISIS) in Syria.

At the trial at London’s Old Bailey, the jury of nine women and three men deliberated five hours to reach a verdict. Shilan Ozcelik was sentenced to 21 months in a young offender institution. The judge, John Bevan, called the Kurdish girl “a stupid, feckless and deeply dishonest young woman.”
“You are the author of your own misfortune. You have lied to your family and this jury,”  the judge told Ozcelik. 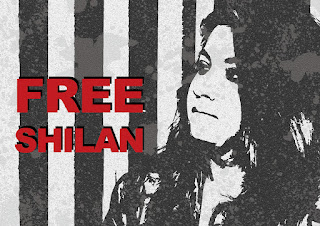 The judgement was also based on a letter the Kurdish girl had left for her family, telling them she had joined the Kurdistan Workers’ Party (PKK) – which is outlawed in Europe as a terrorist organization.

"Believe me this is the right thing for me to do. I am so happy right now that I have become a militant,” Ozcelik wrote in the letter.

The Kurdish girl’s defending lawyer Peter Rowlands said Ozcelik told relatives she was joining the Kurdish militants to hide the fact she had met a man, a 28-year-old man called Mehmet Orhan, in Belgium. She tried to “spare her family from the real truth, which would have brought shame on her in the traditional Kurdish community,” he said.#

Rowlands said in the court room: “There is not a shred of evidence, not a shred, that having left home she joined the PKK, tried to join the PKK, met any members of the PKK, went to Turkey or Syria, or lifted a finger in support of their actions at all.”

However, the jury was not convinced.

Ozcelik is believed to be the first UK citizen to be arrested for trying to fight against ISIS. She has been charged with a terrorist offence under the UK’s 2006 Terrorism Act.

The teenager from London was arrested earlier this year at Stansted airport. Her supporters say she travelled to Brussels in an attempt to try to join the YPG or its women’s YPJ wing. She was arrested on January 16 as she returned from Brussels.

Neither the YPJ or YPG is by itself banned in the UK.

An online petition has started in support of Ozcelik, demanding her release and accusing the judgment of trying to “placate NATO member Turkey.

Ozcelik ”…is a hero not a criminal!,” she petition states. “She…would have joined YPG, which is a legal organization. The British Govt should be ashamed of itself.”

A Kurdish student in the UK told Rudaw that he found the decision "hypocritical."

”The UK is part of the anti-ISIS coalition that bombs ISIS down there. Now a girl is jailed for wanting to fight the same ISIS, as the UK does. It makes no sense," said Mirza Amed.

Neither the YPG nor its women’s wing, YPJ, is banned in the UK. But the PKK is listed as a terrorist group by both the European Union and the United States.

The judgment will prevent other Kurds in Europe from going to fight against ISIS, said Soren Schmidt, lecturer at Aalborg University in Denmark and an expert on ISIS.

“The judgment sends a clear signal that people can’t conduct foreign policy on their own,” Schmidt said.

More Britons have allegedly fought with the YPG against ISIS without being prosecuted. In July, three British and American volunteers who had returned from the battlefield were reportedly received as heroes at the Kurdish Community Centre in London.

Hundreds of foreign fighters have reportedly traveled to Syria and Iraq to fight with Kurdish forces battling ISIS.

Foreign fighters also have joined the Peshmerga forces of the Kurdistan Region in northern Iraq, which remains a staunch US and Western ally in the war against ISIS.

LIFT THE BAN ON THE PKK in UK