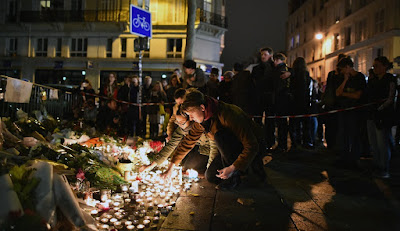 New attacks hit Paris. This time it was done on a grand scale, with coordination and multiple operating modes, up to the suicide bombing.

Targets were also multiple. Unlike the attack against Charlie Hebdo and Hypercacher in January, this time targets were less symbolic, more general and wanted to strike the entire population, except the attack in the Stade de France where the target could have been Francois Hollande.

The attack is claimed by ISIS.

We condemn these attacks, as we condemned the attacks in January.

But we will not shout with wolves, any more than we did in January.

We place ourselves once again on people's side, victim of attacks whose leaders are primarily the imperialists.

The different imperialist plunder the world, sowing misery, causing conflicts between people using the ethnic, religious, cultural, etc. differences between peoples. They intervene militarily, directly or indirectly, overtly and covertly. They do all this for the pillaging of raw resources, the exploitation of "cheap" labor, the establishment of local watchdogs and control of strategic areas.

In recent years, the French state is one of the most aggressive imperialism, with several external interventions of different kind: Afghanistan, Iraq, Mali (transformed into a military operation ranging from Mauritania to Chad in the Sahel region), Ivory Coast , Central African Republic, Libya, Syria, ...

It was France who armed the worst reactionaries who claim to fight for Islam in Syria ! Let us don't forget the state propaganda led by the Socialist Party against Bashar Al Assad, comprador bourgeois serving Russian and Chinese imperialists.

France has armed the Free Syrian Army to overthrow him. The FSA was a breeding ground of the worst religious reactionaries, including Al Nusra Front, one of the worst executioner of the Syrian people. These weapons have ended up in the hands of ISIS with those recovered in Iraq mainly provided by the United States and in Libya by France !

On the other hand, the imperialists are enriched through major arms sales worldwide, weapons that eventually end up in the hands of groups such as ISIS in countries which the imperialists have destabilized.

These interventions are all in the name of "democracy", the "human rights", etc. But each time, it is primarily to defend the interests of French imperialism.

The imperialists are pyromaniac firefighters! They burn their fingers with the fire they have lit themselves!

And as always, it is the people of the world who pay the bills.

They are the ones responsible for these attacks! ISIS and other reactionary groups would not exist if the imperialists do not sowed chaos across the planet!

Now Hollande declared the Emergency State and called the army as reinforcements.

Our fears following the attacks are several.

Firstly, we fear that the anti-immigrant climate and particularly anti-Muslim and anti-refugees will increase. The fascists of all stripes based on an oversimplification of reality and concealing imperialist oppression and exploitation will push further their propaganda and their attacks. The division within the proletariat and the masses may strengthen. This enhances the possibilities for reactionary mass mobilization, targeting a part of the population as scapegoats.

Then, we fear that the Emergency State allows the state to permanently restrict democratic freedoms such as the right to assembly and demonstration. This is already the case in Paris. We fear a strengthening of the police state under the catchphrase "It's for your safety."

Finally, therefore, we are concerned that these phenomena facilitate access to power of an even more reactionary fringe, maybe even fascist, of the bourgeoisie. It is a possibility much more dangerous than further attacks.

We must see clearly the dynamics that take place behind these attacks. We must appoint the imperialists who seek to reshare the world as those responsible for these attacks.

The only answer is that we must develop the revolutionary struggle to bring down the system who sows misery, war, barbarism, death around the world!

Since last January, we affirm:

No national unity behind the bourgeois republic instigators of wars and misery!

Do not yield to fascist propaganda that exploits barbarism to the account of the bosses!

Let us denounce the reactionary religious criminals that serve to weaken our struggles, to divide the people and to spread dangerous feudal ideas among the masses!

Solidarity with Muslim masses who will again suffer Islamophobic wave after these attacks!

Let us close ranks around the working class, last bastion against fascism!