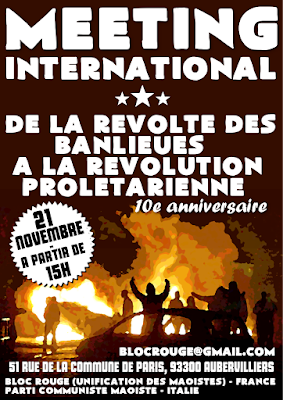 In a Paris, under the state of emergency, the Maoists from different countries of Europe, with the support of the Maoists parties and organisations of the countries oppressed by imperialism and the attendance of other anti-imperialist forces, held a revolutionary meeting, challenging situation emerged in Paris following the reactionaries Daech attacks of 15th of November.


In a militant and combative atmosphere, the revolt of the proletarian and people’s youth in the banlieues in 2005 has been saluted, analyzed and re-launched in its historical significance.

It has been said loud and clear that the Maoists are against the imperialist wars of aggression in Middle East, against state of emergency in France and other imperialist countries and they are on the side of the youth and the people masses of the banlieues in Paris.

The participating forces stated they are ready to take up their responsibility to fight the imperialists and their wars and support all anti-imperialist struggles of the peoples and to assert the universal road of people's war.

The booklet of the meeting, with all speeches, will be published in the coming weeks in English French, Italian, so to allow all revolutionary, anti-imperialist, communist, Maoist forces to continue the discussion, along with their revolutionary practice.

Information  by the PCm Italy.