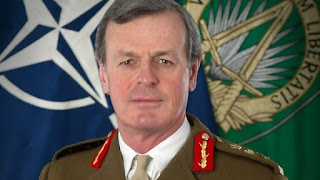 A SENIOR military figure has warned UK air strikes on Syria will not defeat Daesh and could be the first step towards Britain being involved into a “bloody” and protracted war.

Registered users can read up to 10 articles for free each month.
If you would prefer unlimited access, please support our journalism with a paid subscription. Subscribe today for just £3.99 a month.


A SENIOR military figure has warned UK air strikes on Syria will not defeat Daesh and could be the first step towards Britain being involved into a “bloody” and protracted war.

He spoke out after David Cameron last week ruled out the deployment of British ground troops when he pressed the case for bombing missions over Syria, saying the proposed air attacks would be coordinated with ground attacks by some of the 70,000 local troops in Syria linked to “moderate” groups opposed to Syrian dictator Bashar al-Assad’s regime.

But yesterday Shirreff told a national newspaper such a military strategy would not defeat Daesh or recapture Raqqa.

“It’s not something you are going to achieve with 70,000 so-called Syria moderates,” he said.
“To take a city of 350,000 is going to need a massive force. Any fighting in cities soaks up troops in a massive way. It’s heavily attritional, it’s bloody and it’s a grim business.”

There was concern that the Russian air strikes, which were targeting western Syria, far from Isis strongholds, were aimed at helping Bashar al-Assad’s regime rather than weakening Daesh.

Shirreff spoke out after unease emerged yesterday among some Conservatives north of the border about Cameron’s proposals.
SOURCE: http://www.thenational.scot/news/nato-general-sir-richard-shirreff-warns-air-strikes-on-syria-are-useless.10604
SEE ALSO:
democracyandclasstruggle.blogspot.co.uk/2015/11/peter-ford-former-ambassador-to-syria.html
Posted by nickglais on 11/30/2015 06:34:00 AM